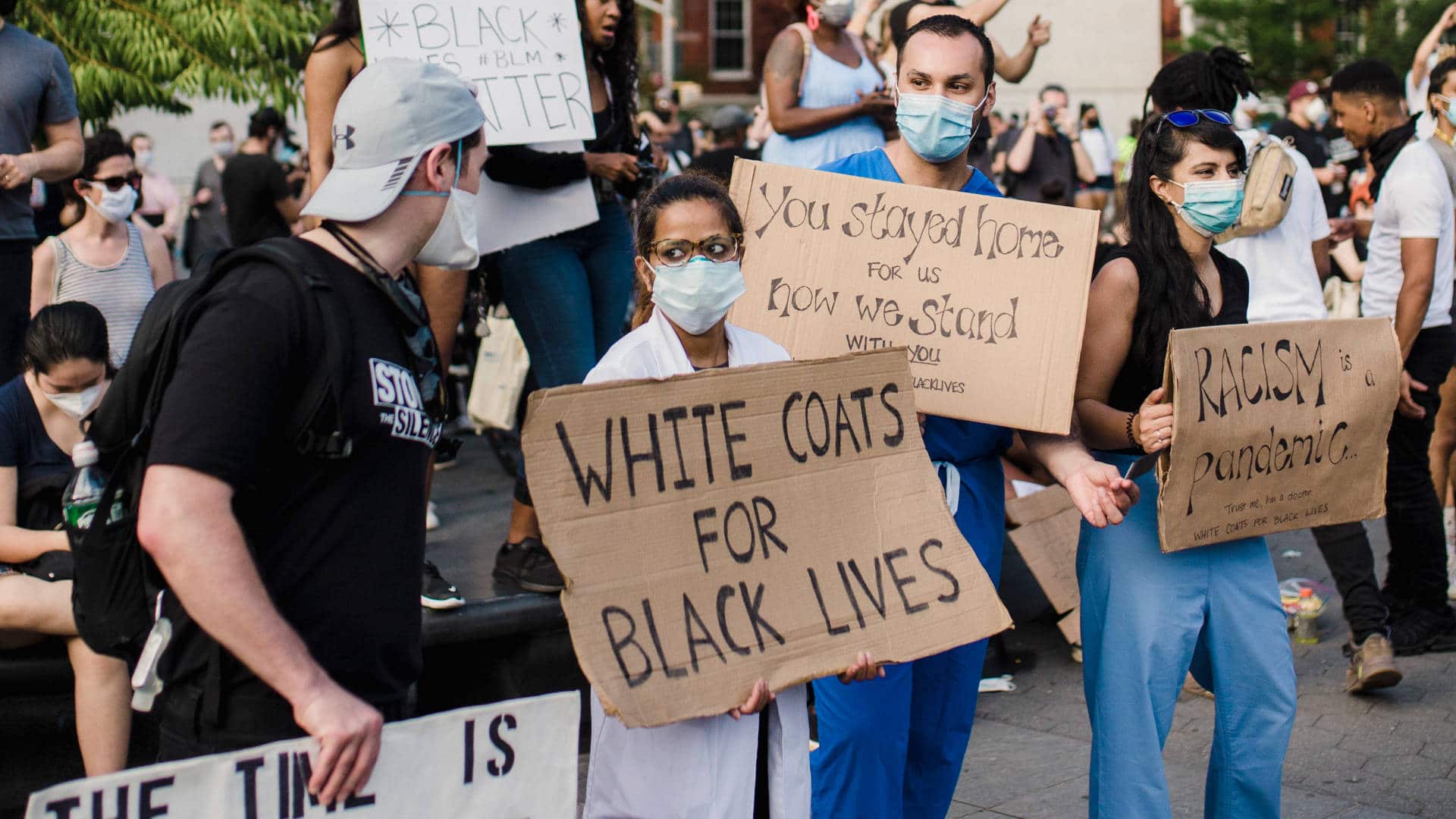 In July 2016, a month before I started medical school, Alton Sterling and Philando Castile were killed by police officers. Soon after came Terence Crutcher and Keith Lamont Scott. These instances of police brutality prompted a group of my classmates to attend a Black Lives Matter rally, donning their white coats. I didn’t attend because of a prior obligation.

But my colleagues’ show of support for Black lives was greeted with some indignation, leading to a heated debate sponsored by bioethics faculty: “Should you wear your white coat to a protest?” Some were adamant that the medical field should use its power to stand up for justice. Others were skeptical. Black Lives Matter was too political a cause. It was painful to sit with my professors and colleagues, debating whether they should use their privilege to defend a life like mine.

What a difference a few years make.

Last month, physicians flooded stadiums and plazas, donning white coats and signs that read “#BlackLivesMatter” amid a nationwide upheaval in response to the killings of George Floyd, Ahmaud Arbery, Breonna Taylor, and Tony McDade. Social media has been inundated with posts tagged with #WhiteCoats4BlackLives. So far, more than 40 medical organizations have released statements against racism, including the largest of them all, the American Medical Association. I can’t help but ask, what took so long?

The contrast between now and when I was beginning my training is stark. Founding members of White Coats for Black Lives, an organization started by medical students in 2014, now reflect on the pushback they were initially met with. Medical student activism deemed too “political” or critical of the institution of medicine has often been met with apprehension from the administrations and faculty of academic medical institutions. This dates back to the 1960s, when medical schools weaponized dress codes and professionalism against activists of the Student Health Organizations who fought the American Medical Association’s opposition of Medicare, among other ills of the profession.

What is simply political for some, however, is also personal for me. In September 2019, a bus driver called the police on me. I had just taken my last licensing exam for medical school in Delaware. I had almost missed the bus but managed to get on 5 minutes before departure time. Still, inexplicably, the bus driver scolded me. When I asked why I was being yelled at, he said he didn’t like my tone and felt threatened, then he asked me to leave. I wouldn’t. He announced the bus wouldn’t move unless I got off. Then he shut the engine off and dialed 911. Passengers got involved. I felt that he knew calling the police would scare me. I chose my safety, got off, and took a train home instead. I live with an intractable fear of the police. Every time I drive by a police car on the highway, my heart gallops.

So it’s discouraging that the medical establishment has been so slow to speak out against racism and police brutality. In 2018, the American Public Health Association declared law enforcement violence a public health issue, but only after the same measure was voted down the year before. It took until 2019 for the American Academy of Pediatrics to release its first ever policy statement on racism and its impact on the health of children. A statement from the American Academy of Family Physicians on institutional racism soon followed.

The current shows of solidarity from medical societies, universities, and their leaders signal their virtues and help spread the message — for any remaining doubters in our halls — that, yes, Black lives matter. Yet, part of me feels like these signals ring hollow. How are we supposed to believe our institutions’ claims to be opposed to racism when we have had to force their hand at every turn?

All of this takes place against the backdrop of a medical education system that is ridden with structures that promulgate bias, especially against Black students. Research has found evidence of gender and racial bias both in the grading of students’ performance in clinical rotations and in the word choices used in written performance evaluations — both of which are important for residency selection. A Yale study found that Black students were six times less likely than White students to be inducted into the prestigious medical honor society Alpha Omega Alpha, even after controlling for grades, licensing exam scores, leadership activity, and other factors. Yet few schools have suspended their Alpha Omega Alpha chapters to bring a halt to this unjust system. The differential treatment continues along the medical hierarchy: Black physicians report experiencing discrimination in the workplace and facing barriers to promotion, all of which contributes to burnout and attrition.

How are we supposed to believe our institutions’ claims to be opposed to racism when we have had to force their hand at every turn?

Medical institutions’ recent statements denouncing racism should therefore be accompanied with concrete, evidence-based commitments to address racism, and especially anti-Blackness, within the profession itself, and vis-à-vis Black patients. These commitments should include an appropriate timeline and accountability mechanisms to boot, as medical students across the country are demanding. Support Black students. Fund and support Black faculty. Treat the disproportionately Black custodial workers with dignity and pay them a living wage. Build equitable relationships with community-based organizations. Commit to delivering equitable, non-segregated care.

For individuals and institutions alike, this means relinquishing and redistributing power and privilege. Institutional change will not be sustainable unless our White and other non-Black colleagues in the medical profession commit to personal change. Will faculty and residents be more careful when filling out student evaluations and writing letters of recommendation? Will they challenge family members, friends, or colleagues over their racist comments even if it disturbs the peace? Or will they quit when they feel the discomfort that comes with evaluating daily practices that uphold White supremacy?

The cynic in me worries that when the rubber meets the road, many will revert to their old ways. If either individuals or institutions fail to actively commit to the redistribution of power and resources within and outside of academia, then the symbolic shows of support for Black lives are like a sugar pill — mere clutter in our email inboxes and social media feeds. They do nothing.

Max Jordan Nguemeni Tiako, M.S., is a 5th year medical student at the Yale School of Medicine, and a research fellow in the Center for Emergency Care and Policy Research at the University of Pennsylvania. He writes about racism in health care and medical education, and hosts the podcast Flip the Script, focused on health inequities. Follow him on Twitter at @MaxJordan_N/@FlipScriptPod.