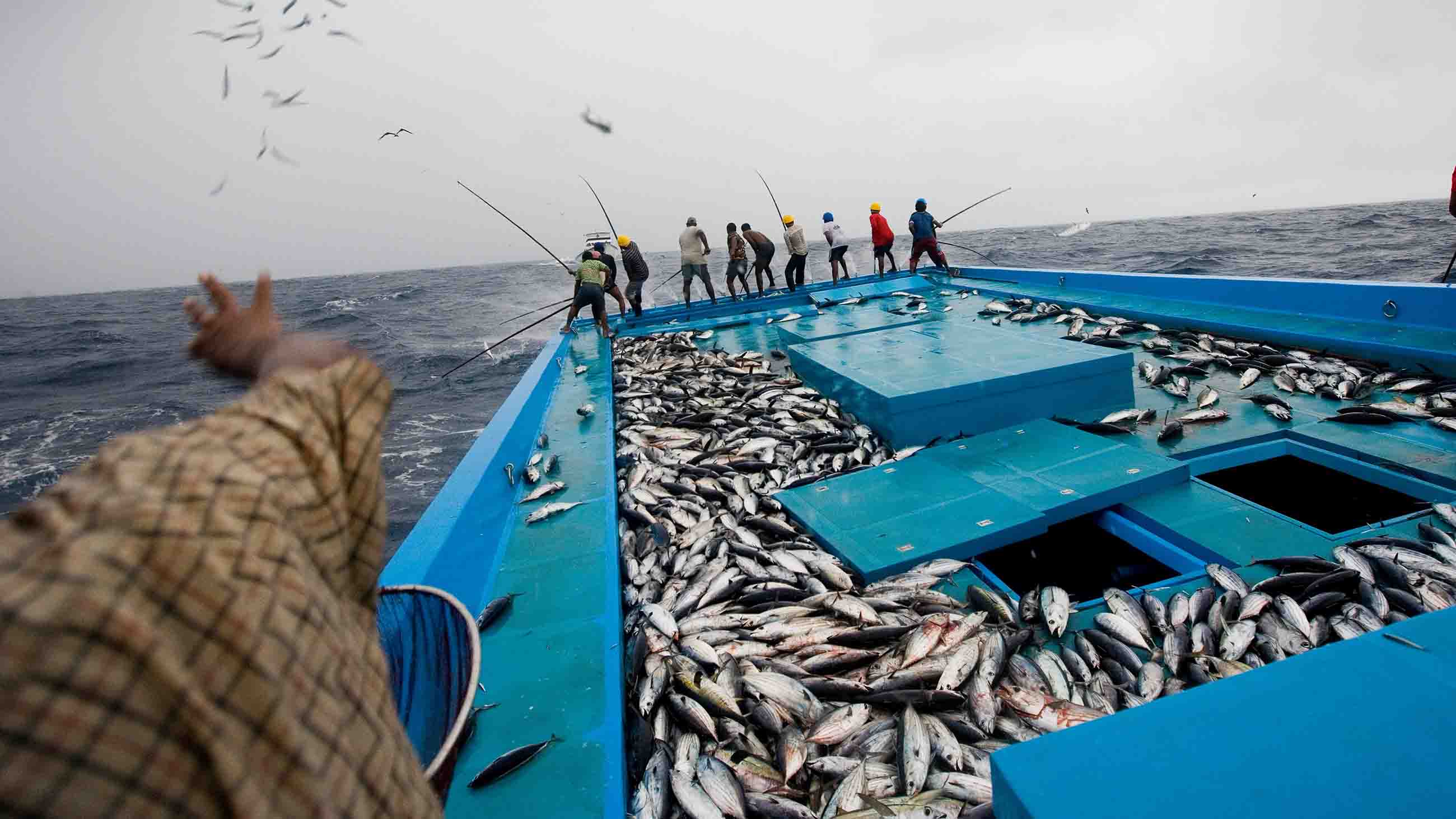 Kelsey Miller, fisheries researcher with a global advocacy group, wobbled for balance on a 50-foot fishing boat as silvery tuna flew through the air towards her. It was 2014, and as the vessel pitched off the coast of the Maldives, a collection of atolls several hundred miles southwest of the southern tip of India, a dozen or so fishermen working in the stern pulled the fish from the water one by one with fishing poles, flipping their catch towards the boat’s bow.

When the fishermen took a break, Miller and her colleagues went to work, hastily counting, weighing, and measuring the fish — along with any other sea creatures, from juvenile sharks to mahi-mahi, that were incidentally caught in the process. The team was conducting research for a study, published in PLOS One last spring, on “bycatch” — the myriad unintended sea creatures captured by fishermen, typically in massive nets as they pursue a commercial species. As the study notes, Miller and her colleagues with the International Pole and Line Foundation, a U.K.-based tuna conservation group that advocates for the less impactful fishing technique, spent more than 100 days monitoring accidental catch — and found surprisingly little.

According to her tally, the old-school pole-and-line fishing method used around the Maldives captures incidental, unwanted species at a rate of just 0.65 percent. This, the researchers suggest, compares favorably to more aggressive commercial fishing with nets or multiple baited hooks, which can have bycatch rates ranging from 5 to 30 percent. In 2011, the National Oceanic and Atmospheric Administration reported that the average rate for U.S. commercial fisheries was 17 percent.

“Pole-and-line lets fishermen have a relationship with each fish that they bring on board, catching them by the individual, rather than by tons,” Miller said.

Of course, using a line and pole also means that commercial fishers catch fewer fish — or need to spend more time, more fuel, and more resources, critics of the pole-and-line method argue, to make up the difference. That’s partly why it remains far from clear whether or even how traditional pole-and-line fishing as it’s practiced in the Maldives could ever catch on within the commercial fishing industry elsewhere — though with the higher price pole-and-line caught tuna commands, Miller hopes that in some areas it will. Still, there is one thing that all sides can agree on: Bycatch is a problem for the fishing industry everywhere, and perhaps no more so than within the trade for tuna, which is among the most fished species in the world.

Commercial fishing operations bring in over 5 million tons of tuna each year, according to 2012 research by the Pew Charitable Trusts. About 63 percent of that global catch is brought in using massive purse-seine nets, which circle around and enclose schools of fish using a drawstring to gather them in. This method of fishing is valued for its industrial efficiency, but has long been criticized for its destructive effects on other sea creatures including sea turtles, dolphins, and sharks.

The most common alternative practice to seine netting is known as longline fishing. This involves placing baited hooks at intervals along a long line that trails the boat. Longline fishing accounts for 14 percent of the global tuna catch but as with nets, it carries serious bycatch problems. Along with other marine researchers, NOAA has found that the lines entangle sea turtles, seabirds, and other marine animals as they drift through tuna-rich waters. In 2014, the National Resources Defense Council estimated that these and other commercial fishing practices killed some 650,000 marine mammals around the world.

All of this has led Miller and her colleagues to become outspoken advocates for old-fashioned pole-and-line fishing, in which fish are pulled in one at a time, with most of the non-commercial species simply returned to the ocean alive. The analysis “offers some important suggestions to further progress the understanding of pole-and-line fishery issues,” the researchers’ organization noted at the time their study was published, “and ways in which the small number of interactions with non-target species might be further mitigated.”

To gather their data, Miller and her colleagues observed 106 days at sea between August 2014 and November 2015. During the 87 days that pole-and-line fishing took place, 162 tons of tuna were caught. Bycatch during this period amounted to .65 percent of the total catch, or just over one ton. The majority of this unintended catch — made up mainly of rainbow runner and mahi mahi — was eaten or sold. No marine mammals or turtles were caught during the study period. In comparison, the study notes, the bycatch rate for longline tuna fishing is 28 percent, while the rate for purse-seine fishing is 5 percent.

Less clear are the fatalities that may go unobserved due to the widespread use by pole-and-line fishers of drifting fish aggregation devices (FADs). These devices, involved in catching about half of the tuna brought in using pole-and-line fishing, normally include netting that’s submerged and attached to a buoy. Meant to attract tuna to a specific spot, these devices can cause other animals to become entangled, and while Miller and her co-authors didn’t observe any entanglements during their study period, they say more study is needed.

Of course, all of this is very idiosyncratic to the Maldives, where according to Miller’s study, more than half of all fish caught are eaten locally, rather than exported. While fishing is the second biggest industry in the island nation, the country’s total annual catch —and the catch for pole-and-line in general — is minuscule when looked at on a global scale. According to a report from the International Pole and Line Foundation, between 2011 and 2014, fishermen in the Maldives brought in an average of 84,000 tons of tuna each year. Around the world, the method brought in about 398,000 tons each year. This compares to purse-seine fishing, which annually nets about 2.6 million tons of tuna around the world, the majority of which is caught in the Pacific Ocean. According to a 2011 report that looked at fishing in the Solomon Islands east of Papua New Guinea, a pole-and-line crew of 30 or more could be expected to catch 50 tons of tuna a year, while a purse-seine crew of 26 could bring in 424 tons.

One of the reasons for these massive differences is that pole-and-line fishing boats have a relatively small range. According to Martin Hall, head of the Bycatch Program and International Dolphin Conservation Program at the Inter-American Tropical Tuna Commission, because they use live bait which must be caught and stored, pole-and-line vessels can generally only go out for a few days at a time. The amount of time fishermen can spend actually catching tuna, Hall explained, may also be reduced if they don’t catch the bait they need in time. This is compared to large purse-seine vessels, which when packed with supplies, can fish for 60 to 70 days, Hall says. Even if pole-and-line operations were able to be scaled up — say, by using more long-lasting bait — there would be increased competition from the longline and purse seine vessels fishing in the same space.

Though he acknowledges the growing market for pole-and-line caught tuna, which necessitates consumers’ willingness to pay a higher price, Hall says he doesn’t see it becoming a major supplier for global demand. “I think it’s a very nice way of fishing,” Hall says. “It could help some coastal fisheries. But the big solution to the world market is not going to come from there.”

Addressing the issues involved in scaling up, critics of pole-and-line fishing also point to the increased fuel consumption that would be needed to catch the same amount of fish as net operations.

“If you want to look at the carbon footprint, it’s apples and oranges. That part of the equation never gets mentioned,” says Mike Conroy, president and founder of West Coast Fisheries Consultants, whose clients are fishermen, fishing associations, government agencies, and other entities. He says that especially when fishermen are limited by a quota, they can catch more in less time using nets.

On a smaller scale, however, it seems as though at least some fisheries can make the pole-and-line model work. On the U.S. West Coast, Nancy Fitzpatrick, executive director of the Oregon Albacore Commission, says that fishermen in that state can make a good living on albacore tuna using the pole-and-line method. “They’re bringing in tons at a time because they’ve got 40-, 50-, 60-foot boats,” she says, adding that the price varies year by year depending on availability. “It’s very economical for them to go out and do this.”

The albacore fleet in Oregon also rejects the use of fish aggregating devices — something still deployed by Maldivian fishers. The large-scale deployment of these devices can alter environmentally-based migratory behavior of other species like skipjack tuna, and some conservation groups have opposed FADs.

Miller acknowledges these criticisms and is the first to agree that pole-and-line fishing may not be the answer to all issues with fishing in the ocean. But she argues that there are many large-scale pole-and-line fisheries around the world, and the potential high value of some types of tuna makes pole-and-line a solution to the sustainability problem.

“I hope fishermen can be paid appropriately for their work, and if they can get more for high quality eco-friendly products, it might make other fishermen consider if it is in their best interest as well,” she says.

Joshua Rapp Learn is a D.C.-based journalist who writes about science, culture, and the environment in publications such as National Geographic, New Scientist, Smithsonian Magazine, and The Atlantic. Follow him on Twitter at @JoshuaLearn1.