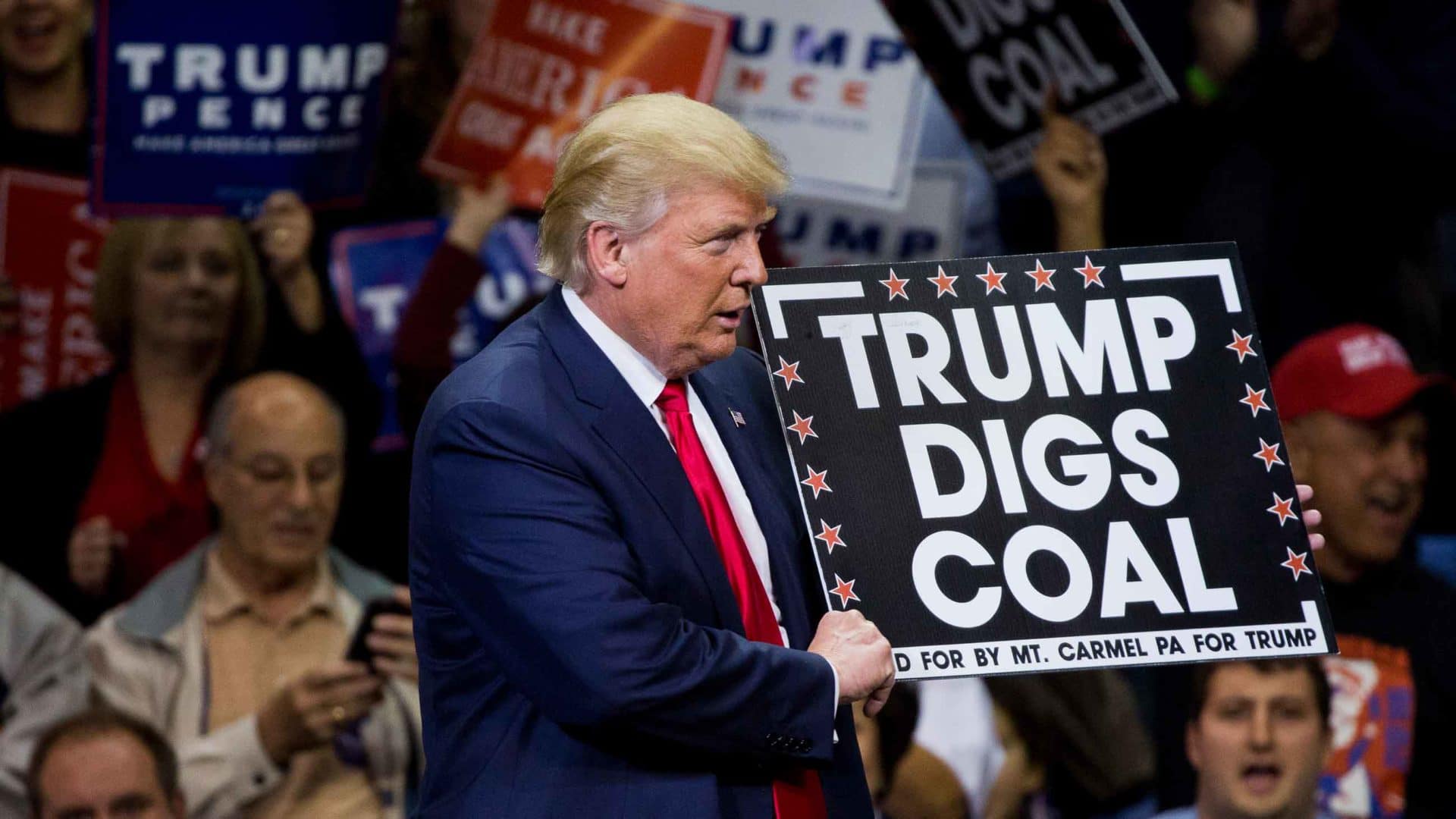 The Trump administration has weakened a number of regulations on the coal industry, including those intended to reduce emissions and drilling on public lands. Visual: Dominick Reuter/AFP/Getty Images

On Monday, as Washington, D.C. was soaked and flooded by the sort of heavy rainfall that experts predict will only increase in frequency and severity as the climate changes, President Trump took to the East Room of the White House to deliver a 45-minute speech touting his administration’s environmental accomplishments.

But as critics and fact-checkers were quick to point out, many of Trump’s statements run contrary to his policy record. While Trump listed “the very cleanest air and cleanest water,” and protecting public lands as top priorities for his administration, he has spent much of his time in office weakening and dismantling over 80 Obama-era regulations on emissions, toxic waste disposal, water systems protection, and public lands use.

The president also defended his decision to withdraw the United States from the Paris Climate Agreement, claiming “[e]very single one of the signatories … lags behind America in overall emissions reductions.”

While this statement is accurate in absolute terms, according to a 2018 report from the International Energy Agency (IEA), the comparison doesn’t account for differences in population size or starting levels of emissions in other nations. Ten other countries have achieved a larger percentage decrease in emissions since 2000, according to the IEA data.

Trump’s speech follows criticism from a number of Democratic candidates looking to make his administration’s inaction on climate change a major issue of the 2020 presidential election. The president did not use the phrase “climate change” during his remarks.

“You’re taking one of the largest, most urgent challenges facing not just this country but the world, and you put your head in the sand, like an ostrich,” Former Colorado Governor and presidential hopeful John Hickenlooper told E&E News. “By not acknowledging it, it doesn’t make it go away.”

• Tourists and researchers alike are flocking to Southern California to get a glimpse of an unusual attraction: a landscape scarred with massive surface ruptures in the aftermath of two earthquakes. The earthquakes hit last week near the Mojave Desert town of Ridgecrest, damaging homes and roadways, and it may have caused one death. The largest fracture, caused by the 7.1 magnitude earthquake last Friday, could measure 28 miles in length, though scientists from the U.S. Geological Survey and California Geological Survey have yet to provide confirmation. In addition to the visible cracks, satellite images from NASA also show further damage to the earth’s crust. Studying them, NASA Jet Propulsion Lab’s Eric Fielding told The Los Angeles Times, “allows us to better understand where future earthquakes could happen.” Despite panic among residents, experts say the earthquakes are unlikely to signal the coming of the “big one,” a catastrophic earthquake expected to occur along the San Andreas Fault. (The Los Angeles Times)

• The body of American molecular biologist Suzanne Eaton, who disappeared last week while attending a science conference on the Greek island of Crete, was discovered Monday in a World War II bunker. Local authorities have opened a criminal investigation into her death. The coroner’s office announced Thursday that Eaton, 59, had been strangled before being left in the bunker, which was used by Nazi soldiers during their occupation of the island. She was reported missing on July 2 after apparently leaving her hotel for a run. The California-born Eaton, who led a research group studying cell development in fruit flies at Germany’s Max Planck Institute, was also an accomplished athlete and had a black belt in taekwondo. The coroner said there were signs that she had been physically restrained, and more than one person is suspected in the attack. Eaton’s colleagues responded with both grief and tributes to her talent as “an outstanding and inspiring scientist,” expressing deep dismay about the “tragic event.” (CBS News)

• An abrupt shake-up of top officials at the National Aeronautics and Space Administration (NASA) occurred Wednesday night, according to an email from Administrator Jim Bridenstine to agency staff obtained by The Washington Post. Agency veteran and longtime head of the human exploration program, William Gerstenmaier, has been reassigned as a special assistant to Deputy Administrator Jim Morhard, ending his leadership of NASA’s recent efforts to return astronauts to the moon. Gerstenmaier’s second in command, Bill Hill, was also reassigned and will serve as special advisor to Steve Jurczyk, NASA’s associate administrator. The shuffle follows reports of delays and overspending on key infrastructure as the agency rushes to meet the Trump administration’s mandate of a crewed lunar landing by 2024, a timeline many experts have called unfeasible and risky. In a speech in March announcing the new mission timeline, Vice President Mike Pence warned the agency: “If NASA is not currently capable of landing American astronauts on the Moon in five years, we need to change the organization, not the mission.” (The Washington Post)

• A Trump administration rule that would have required prescription drug makers to disclose the price of their medicines in television ads was blocked by a federal judge Monday. The decision came after three companies sued the administration last month on the basis that such a rule fell outside the authority of the Department of Health and Human Services (DHS) and that it violated their First Amendment rights. Prescription drug advertising, which is only allowed in the U.S. and New Zealand, has skyrocketed in recent years, with the U.S. industry bringing in $6 billion a year. While Judge Amit Mehta of the D.C. District Court said the costs associated with Trump’s rule would “amount to a rounding error” for companies, it represents an “incursion into a brand-new regulatory environment.” A DHS official told STAT the agency would work with the Department of Justice on “next steps.” (STAT)

• For months, computer scientists and election experts advised officials in Georgia on how best to upgrade their aging and insecure voting system. They wrote letters, they testified at hearings, and they shared the latest research and technical concepts tied to holding safe and reliable elections — including the recommendation that the state return to a system of paper ballots filled out by hand, combined with what scientists call risk-limiting audits. In the end, state officials ignored all this advice. They are now dropping millions of dollars on a new, touchscreen-based voting system that critics say essentially ignores two decades of lessons-learned about the vulnerability of computers when used to register and tally the most fundamental articulation of democracy. And Georgia isn’t alone. Hundreds of U.S. counties use computerized systems that present real security and reliability concerns, computer experts say, further eroding Americans’ faith that their will is being accurately represented at the polls. “You simply can’t construct a trusted paper trail,” Richard A. DeMillo, a distinguished professor of computing at the Georgia Institute of Technology, told Undark this week, “if you let a machine make a ballot for you.” (Undark)

• And finally: In Florida, it’s open season on the green iguana. The state’s Fish and Wildlife Conservation Commission is now encouraging homeowners to kill the oversized lizards “whenever possible.” The directive is the latest in a series of escalating measures by state officials to control the invasive reptile. In 2017, the state hired a trapper to help manage the lizard’s population in the Florida Keys, and began offering workshops to educate homeowners on trapping techniques. The green iguana has proliferated since arriving in Florida in the 1960s — a population boom attributed largely to pets being released or allowed to escape into the wild. The University of Georgia’s Center for Invasive Species and Ecosystem Health has tallied more than 4,000 iguana sightings in Florida over the past 14 years; the reptiles have popped up in toilets, threatened native flora and fauna, and been found defecating in swimming pools. Although the state is encouraging residents to kill any iguana they find on their property, they warn that the execution must be humane. Even for interloping iguanas, animal cruelty rules still apply. (The Miami Herald)