Like me, you might have been distracted by your smartphone when a tumble of translucent jellyfish billowed across your television screen and caught your eye. Something about their primordial beauty pulled your attention away from that gripping game of Words With Friends. And as part of your brain heard a soothing voiceover for a commercial claiming that these ancient animals held the secret to memory loss, the other tried to think of a word containing the letters e, m, a, d, u, and s. The key to improved memory, the authoritative voice said, was a dietary supplement containing a special protein originally found in jellyfish. WHAT I LEFT OUT is a recurring feature in which book authors are invited to share anecdotes and narratives that, for whatever reason, did not make it into their final manuscripts. In this installment, Juli Berwald shares a story that was left out of her new book, “Spineless: The Science of Jellyfish and the Art of Growing a Backbone” (Riverhead Books).

From years of chasing jellyfish stories, I’ve learned about a jellyfish protein that has played an outsized role in medicine. The green fluorescent protein, also called GFP, was isolated from Puget Sound’s crystal jellyfish in the 1960s. The protein has a compact structure, like a soda can with a fluorescent pigment tucked inside it. If you shine blue light on the molecule, it lengthens the wavelength to green and re-emits an emerald shine. In the 1990s, molecular biologists recognized that the gene for this compact protein could act as a molecular beacon: By the light of its glow, scientists could literally see where and when genes were switched on and off inside living creatures. GFP revolutionized biotechnology; the scientists who discovered its capabilities were awarded a Nobel Prize in 2008. Today the gene for GFP has been inserted in all manner of organisms, from amoebae to zebrafish. No other single protein has been as critical to understanding diseases as diverse as Alzheimer’s, cancer, HIV, and Ebola.

Could the jellyfish protein help you remember that elusive word? I doubt it. The idea behind the supplement is that along with GFP, jellyfish produce a protein called aequorin that has the power to scavenge calcium from nerve cells that become overstuffed with that mineral as we age. The supplement’s main ingredient is a synthetic form of aequorin called apoaequorin, but there’s no evidence that apoaequorin can survive the protein-digesting environment of the stomach, much less cross the blood-brain barrier. The product, Prevagen, has undergone one clinical trial in humans, with weak controls. The FDA issued the company a warning letter and the FTC and New York’s Attorney General have filed a complaint.

But while the memory claims may be dubious, jellyfish and their kin have long been considered a balm for all sorts of medical problems — and no wonder, given their astounding regenerative abilities. Most can grow new tissues and even new organs. Some, like the common moon jellies recognizable by the white four-leaf-clover shape on their top, can grow into an entirely new individual from just a single piece of tentacle. In the extreme, a freshwater cousin of the jellyfish called a hydra can survive being chopped in a blender. Its pieces will crawl their way back toward each other to reassemble as a complete organism. (I’ve heard it said that this gruesome capability inspired Mary Shelley’s monster in “Frankenstein.”)

Recently, researchers in China set out to glean the biology behind the jellyfish’s remarkable healing and what it could mean for us. When human tissues are damaged, the body responds in three ways: Cells around the injury multiply; then they migrate to cover the wound; and they lay down a scaffolding for the new tissue to grow on. When an extract made from lion’s mane jellyfish tentacles was tested on human cells, it proved a boon to the first two processes, encouraging cell proliferation and migration. At a more granular level, the tentacle extract turned on a set of genes that encourage human cells to transition from a growing phase into a DNA replication phase. (If you remember your cell cycle, from G1 to S/G2.) While it’s still early, the hope is that jellyfish will result in new wound-repair drugs. 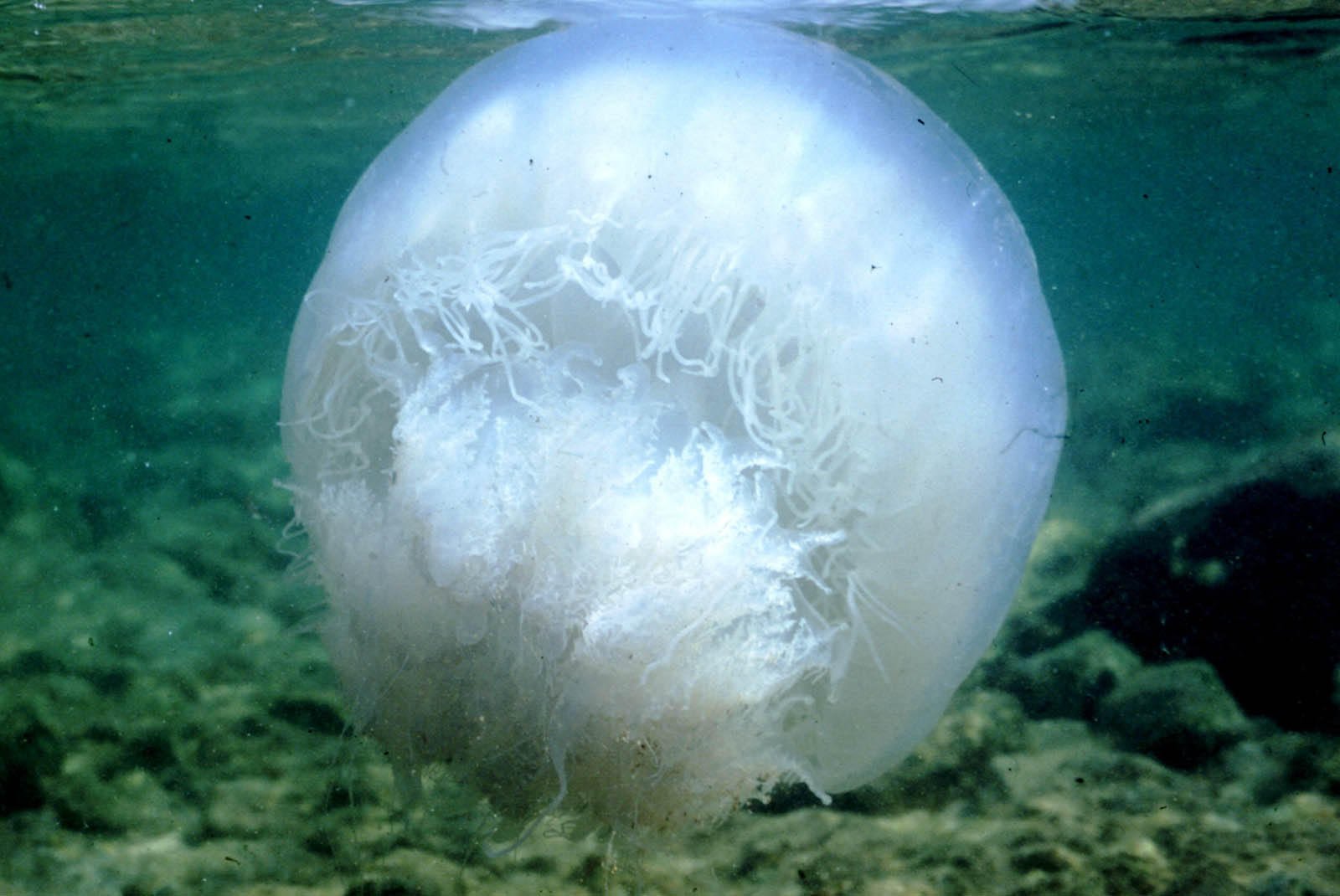 A more tangible aspect of wound healing is the humble bandage. Shachar Richter, a materials scientist at Tel Aviv University in Israel, thought jellyfish might improve on old-fashioned dressings. When I met him to talk about his innovation, he showed me a petri dish with a white strip inside. “This is made entirely from the nomadic jellyfish,” he said. It was the thickness and width of adhesive tape, but much more flexible and thin, almost silk-like. It felt fragile in my fingers, but when I tugged a little, it was durable. Richter had turned jellyfish into fibers and had woven those fibers into the thin, completely biodegradable bandage I was holding. Tests showed that the bandage was super-absorbent and particularly good at soaking up blood. He was investigating whether nanoparticles laden with medicines could be embedded in the fibers. Like the idea of tentacle extract for wound healing, this project was in preliminary stages, with patents pending and more work to be done to prove out the concept. But the idea of jellyfish to help us heal seems to have, if not legs, at least tentacles.

While jellyfish might be used to heal human skin, they’re much better known for the element they use to inflict excruciating pain: the stinging cell. And other Israeli researchers have built a business on the idea that this organelle is nature’s hypodermic needle — only better, because it doesn’t hurt. I’m a complete needle-phobe, so I visited the headquarters of a company called StarletDerma, about an hour north of Tel Aviv, to learn more.

Amir Toren, the CEO, explained that the anatomy of a stinging cell is basically a tiny balloon, just a few microns across, with a trapdoor on one end. A long hollow tube armed with spears is twisted up inside. When it’s triggered, the balloon’s membrane becomes porous and it fills up — like a water balloon. The pressure bursts the trapdoor open and the tube unfurls with such force that it becomes a microneedle that can pierce human skin.

Stinging cells explode with an acceleration of 5 million Gs, Toren explained. (A Ferrari accelerates at less than a millionth of that.) “This is considered to be the fastest mechanism in nature,” he added, “and the diameter of the hole that the needle makes on the skin is less than a micron.” As you know from getting shots with thin needles compared to fat ones, smaller punctures hit fewer nerves. Toren’s product is applied in two layers: a base of freeze-dried stinging cells topped with a water-based cream that deploys the stinging cells. It is formulated so that 100,000 microneedles inject each square centimeter of skin.

The company recently switched its focus from jellyfish to a cousin, the starlet sea anemone (Nematostella vectensis), which lives partly buried in the muddy sea floor off the east coast of the United States and, like the jellyfish, produces stinging cells. This anemone, Toren explained, has practical advantages over jellyfish. Since it spends its life lying down, it can be more easily cultured in shallow tubs than swimming jellyfish, which require tanks full of seawater. Also, the natural toxins in this anemone’s stinging cells are extremely weak and can be removed in the formulation process.

But the real key to stinging cells as a business idea, Toren said, has to do as much with the anatomy of our skin as that of a stinging cell. The stratum corneum is a plastic-wrap-thin coating protecting our entire bodies. It’s our first and best defense against microbial invaders. But it is also an obstacle for getting drugs or cosmetics into the living tissue below. You can rub creams on your skin, but unless they can get past the stratum corneum, they won’t have much impact. Stinging cells used as microneedles are ideally suited to penetrate that barrier. And if a drug or cosmetic is added to the cream that deploys the stinging cells, it will be pumped passively below the stratum corneum for hours. The company has performed some clinical trials delivering acne medicine and collagen to minimize wrinkles, and the results were preliminary but encouraging. Stinging cells from starlet sea anemones, like this one grown in a lab in Israel, may be deployed as tiny hypodermic needles. Visual: Juli Berwald

After we’d talked a while, Toren took me on a tour of the warehouse where the sea anemones were grown. It reminded me of a computer data center full of racks of equipment. But instead of the hum of electronics, the air was filled with the sound of trickling water. The racks contained plastic tubs, and when I looked inside one I saw a layer of what looked like maroon bean sprouts. Just then the vice president of research and development, Yossi Tal, a tall man with a big personality and a booming voice, strode over. He filled a petri dish with a few of the sprout-like sea anemones and placed them under a microscope so I could look. He filled an eyedropper with brine shrimp and squirted them toward the anemones, which fired their weaponry in response to the presence of food. “They are so fast! You can almost see the recoil,” I crowed. After each capture, the tentacle curled around the prey, pulling it near the animal’s mouth. Soon the tentacles were twisted and piled, like spaghetti wound around a fork.

“It can penetrate nails and hair as well,” Toren told me. “But we aren’t doing anything with that right now.”

“Could it dye hair?”

“Or what about a Brazilian blowout?”

“Ok. Why not?” Toren rubbed his nearly bald head. “But for me, it will not work.”

There’s no telling when or if we’ll ever see any of the many ideas for jellyfish pharmaceuticals stocked on the shelves of our local stores. But I’m painfully aware of the spray of gray hairs at my temples, the deepening creases around my eyes, and a growing spot of pain in my chin. I also have a stubborn wound on my finger that started as a burn. I am at the age for gray hair, wrinkles, and thinning skin. All in all, future gelatinous cures for hair dye and acne, wrinkles and wounds all sound pretty good to me. Although I do have my limits. When it comes to phone games, I’m just going to have to work a bit harder to recall the word “medusa” on my own.

Juli Berwald is a science writer from Austin, Texas. She received her Ph.D. in ocean science and has written for publications including The New York Times, Nature, and National Geographic.