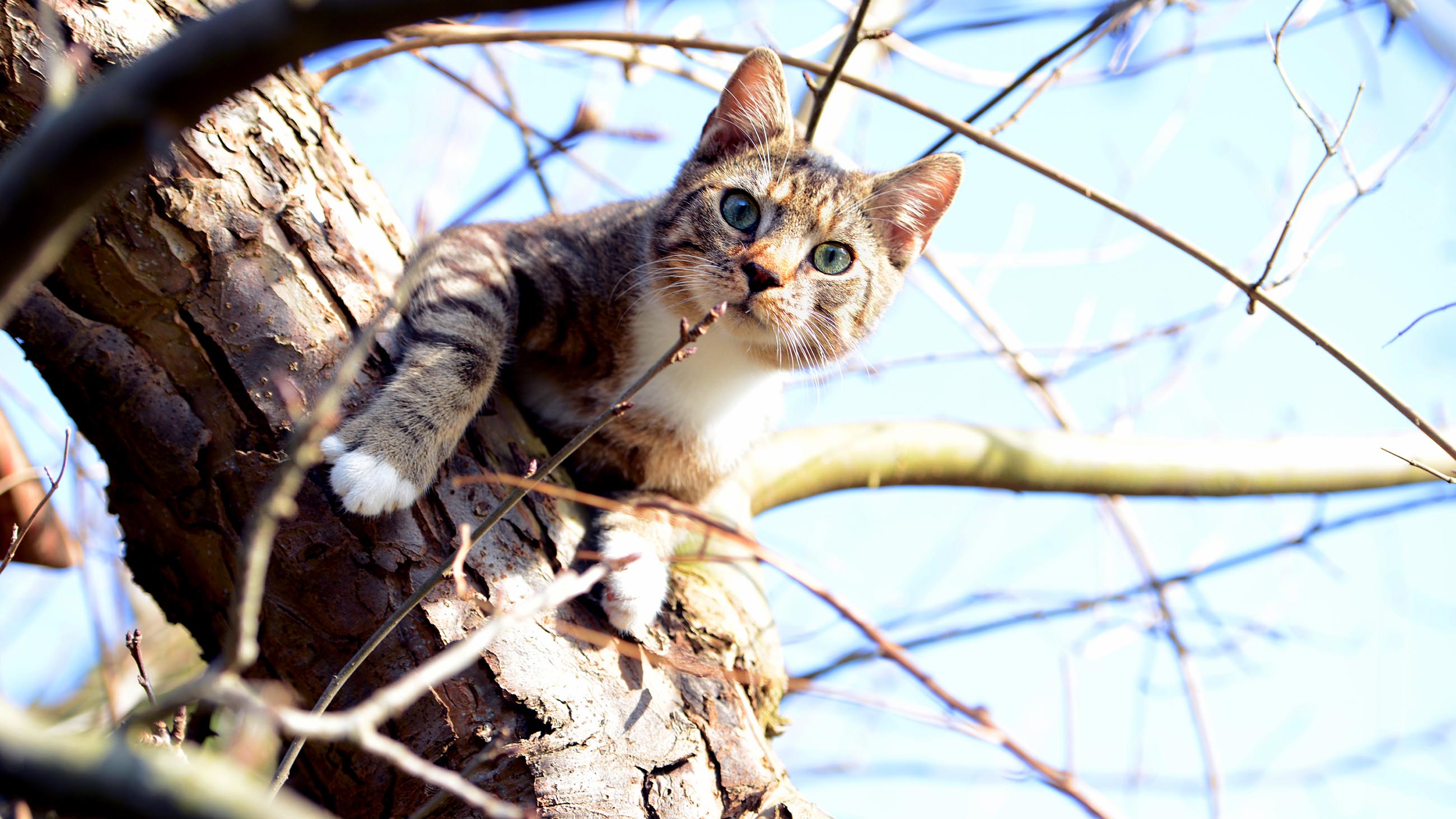 In early 2013, Peter Marra, the head of the Smithsonian Migratory Bird Center, published a stark report on America’s outdoor cats. In the seven-page paper, Marra and two of his colleagues estimated that free-ranging felines — unowned feral cats and pets allowed to roam outside — are decimating our wildlife, killing a median of 2.4 billion birds and 12.3 billion mammals every year. The New York Times announced the findings with a provocative headline — “That Cuddly Kitty Is Deadlier Than You Think” — and photo: a green-eyed orange tabby with a limp brown rabbit in its mouth. Fur flew. The article attracted nearly 1,700 online comments, many of them outraged. “If I see a cat on my property I know it is going after the birds in my little sanctuary,” one reader posted. “If I could get away with it I’d kill it.” Others, however, challenged the researchers’ findings—“With those numbers we should be tripping over carcasses!”—and insisted that the scientists were persecuting cats: “I’m tired of everyone putting down cats and trying to justify their extermination.”

It wasn’t the first time Marra’s research had stirred up controversy, and now he has waded right back into it with his comprehensive new book, “Cat Wars,” which makes a convincing case that unconfined felines are taking a major toll on wildlife — and putting cat lovers and bird lovers on an ugly collision course. “More and more people are valuing birds and swelling the ranks of bird-watchers,” Marra and his co-author, Chris Santella, write. “Likewise, there are more cat owners in America now than at any time in history. As each side has swelled in numbers, the stage has been set for ‘bird people’ and ‘cat people’ to square off, forgetting, perhaps, that they are all animal lovers in the first place.” The war — call it Big Cat vs. Big Bird — is on. And right now, we’re all losing.

Though it is difficult to pin down their exact origin, domestic cats probably emerged in the Fertile Crescent, in the Middle East, after the invention of agriculture. Farms attracted rodents and birds, which in turn lured wild cats. Over generations, the tamest and most human-friendly felines diverged from their wild relatives, multiplied like rabbits (females average three litters a year), and spread to nearly every landmass on Earth. Today, there are 90 million pet cats in the U.S. alone, and an estimated 60 million to 100 million more that are unowned — though the true number of feral cats roaming the American landscape is unknown.

Unlike rabbits, however, “cats are generalized and opportunistic predators — they will kill anything that moves and is within their size range,” Marra and Santella write. The scale of predation is tricky to estimate, but numerous studies suggest that it’s significant — and may accelerate the decline of bird, mammal, and reptile populations. Cats can have a particularly devastating effect on islands, where small animals may have evolved without predators; in a 2011 paper, researchers calculated that feral cats were at least partly responsible for the extinction of 33 different island-dwelling species. On top of all that, outdoor cats spread disease, including rabies, toxoplasmosis, and the occasional case of bubonic plague.

For Marra and Santella, and for many other biologists, these facts add up to one conclusion: “From a conservation ecology perspective, the most desirable solution seems clear — remove all free-ranging cats from the landscape by any means necessary.” Sometimes, they say, the required measures are lethal ones, such as trapping and euthanizing feral cats or deploying poisoned bait. “No one likes the idea of killing cats,” Marra and Santella write. “But sometimes it is necessary.”

None of this has gone over well with cat lovers, who point out — correctly — that wild animals face many serious threats and that it’s difficult to prove that cats are to blame for species extinctions and declines. While many cat champions concede that too many unowned felines are skulking through the streets, they vehemently oppose lethal forms of population control. Instead, they advocate a model known as trap-neuter-return (TNR), in which volunteers trap feral cats, take them to be vaccinated and spayed or neutered, and then return them to their colonies. (Volunteers frequently provide ongoing care for these colonies, supplying food and shelter.)

Although Marra and Santella allow that “people who care for free-ranging cats are well intentioned,” they argue that TNR programs rarely spay and neuter enough cats to curb population growth — and note that even sterilized cats will continue to prey on wildlife. Many bird lovers reject TNR, and some are so infuriated by the maintenance of large outdoor cat colonies — a practice that the president of the American Bird Conservancy referred to as “open-air cat hoarding” — that they’ve taken matters into their own hands; in 2006, a Texas man was arrested for shooting a feral cat he spotted stalking an endangered piping plover. “Cats are generalized and opportunistic predators — they will kill anything that moves and is within their size range,” the authors write.

Neither side in the cat wars has an unblemished claim to the moral high ground. Some cat lovers traffic in outright denial, refusing to even entertain the possibility that Kitty might be killing birds. Many seem to willfully misread what scientists like Marra are actually proposing, which is not the mass murder of cats but complex, multipronged solutions that may, in some circumstances, include euthanasia.

The conservation biologists and birders, on the other hand, tend to dismiss their opponents as irrational and overly emotional, resistant to real solutions because they have been blinded by cats’ cuteness. They have also been too quick to judge TNR a categorical failure. Marra and Santella simultaneously assert that “the scientific data make it impossible to advocate for TNR” and that “only one truly rigorous analysis has examined the impact of TNR in reducing free-ranging cat populations from a long-term quantitative and population modeling perspective.”

Activists on both sides are prone to hyperbolic, inflammatory rhetoric, and accusations of “genocide” have flown in both directions. And while only a few fanatics resort to threats or actual violence, such tactics are unacceptable and unproductive, whether directed at researchers or neighborhood cats.

Marra and Santella seem genuinely dismayed that the cat wars have grown so heated. Unfortunately, however, they have fanned the flames. Although the book is mostly measured, the authors’ call to remove cats from the landscape “by any means necessary” has drawn particular ire. Princeton University Press, which published “Cat Wars,” issued a statement clarifying that neither it nor the authors “support the inhumane treatment of animals,” but that seemed to make little difference. Amazon reviewers have not been kind, and nearly 3,000 people have signed a petition to boycott the publisher.

So where do we go from here? While science can help illuminate the problem, the cat wars are fundamentally about values, not data. Animal welfare advocates aren’t wrong when they argue that it’s unethical to kill one animal to save another, but neither are environmental ethicists wrong to say that the life of an individual animal shouldn’t take precedence over the good of an entire species.

Yet it is possible to stake out a middle ground. We should begin by acknowledging two non-contradictory principles: First, the numbers of free-ranging cats should be reduced. And second, just because cats are predatory, invasive, and (in some cases) unowned, that doesn’t mean their lives have no value.

Then we need to invest in an array of complementary solutions, beginning with humane population control. While trap-neuter-return may have shortcomings, it’s too soon to entirely dismiss the approach. Many TNR programs are scattershot, underfunded, volunteer-led efforts; giving them real financial support and infrastructure could significantly boost sterilization rates. Although Marra and Santella remain skeptical about TNR, they also outline some common-sense suggestions for improving it, including microchipping, collaring, and regularly monitoring released cats; moving colonies away from the most ecologically sensitive areas; and providing formal training and certification to the people who care for these colonies. When possible, we should also seek to place some of these trapped cats into pet homes and cat sanctuaries, rather than releasing them into the wild, and euthanasia should be considered for cats that are acutely ill. And along the way, we must conduct more rigorous research into the effectiveness of these strategies.

Even with these upgrades, though, TNR alone isn’t enough. “We must act on many different fronts to reduce the populations of free-ranging cats and reduce their impact on native animal populations,” Marra and Santella write. Perhaps the most critical is educating cat owners about the importance of sterilizing their pets, the advantages of keeping cats indoors, and alternatives to abandoning unwanted cats on the street. Laws should require cats to be spayed or neutered, as well as microchipped and licensed. (Licensing fees could be used to help fund population control measures, as Marra and Santella suggest.) It may also be worth exploring leash laws for pet cats, restricting cat ownership in the most critical wildlife habitats, and imposing fines on people who feed feral cats without participating in formal colony management programs.

Together, these sorts of measures — which will leave some cats on the landscape but aim to reduce their numbers systematically, while simultaneously imposing new restrictions on cat owners and advocates — are unlikely to satisfy either side completely. That’s usually a sign of a good compromise.

Emily Anthes, who has written for Undark, The New York Times, The New Yorker, Wired, and Scientific American, among other publications, is the author of “Frankenstein’s Cat: Cuddling Up to Biotech’s Brave New Beasts.”