Across the U.S., vaccine vacation season has begun. In April, The Atlantic reported that Americans were “on the verge of going bonkers” with accrued paid-time off. Prices for summer airfare have risen dramatically since President Joe Biden’s March 11 speech expressing optimism that the pandemic would subside in time for a proper Fourth of July bash.

In Mammoth Lakes, California, a town in the Eastern Sierra known for its skiing and outdoor recreation, tourism has been booming. The town’s residents are terrified. After 2020’s landscape-altering fire season, in which 4 percent of the total area of California burned, Mammoth Lakes locals are keenly aware that rises in tourism come with unique wildfire risks. There is a new and inescapable awareness that each new visitor has the capacity to light the match that starts the fire that destroys their community.

Sometimes, these ignitions are intentional; more often, they are mistakes. I have seen some. During the first of five seasons that I worked in alpine ecosystem restoration in the Eastern Sierra wilderness, I spent two weeks high on the Pacific Crest Trail north of Mammoth Lakes. Over the course of one week that summer, my team found three escaped campfires, including one just hundreds of feet from our camp that had engulfed a lodgepole pine. It took a helicopter and two days for the fire crew to tamp it down. 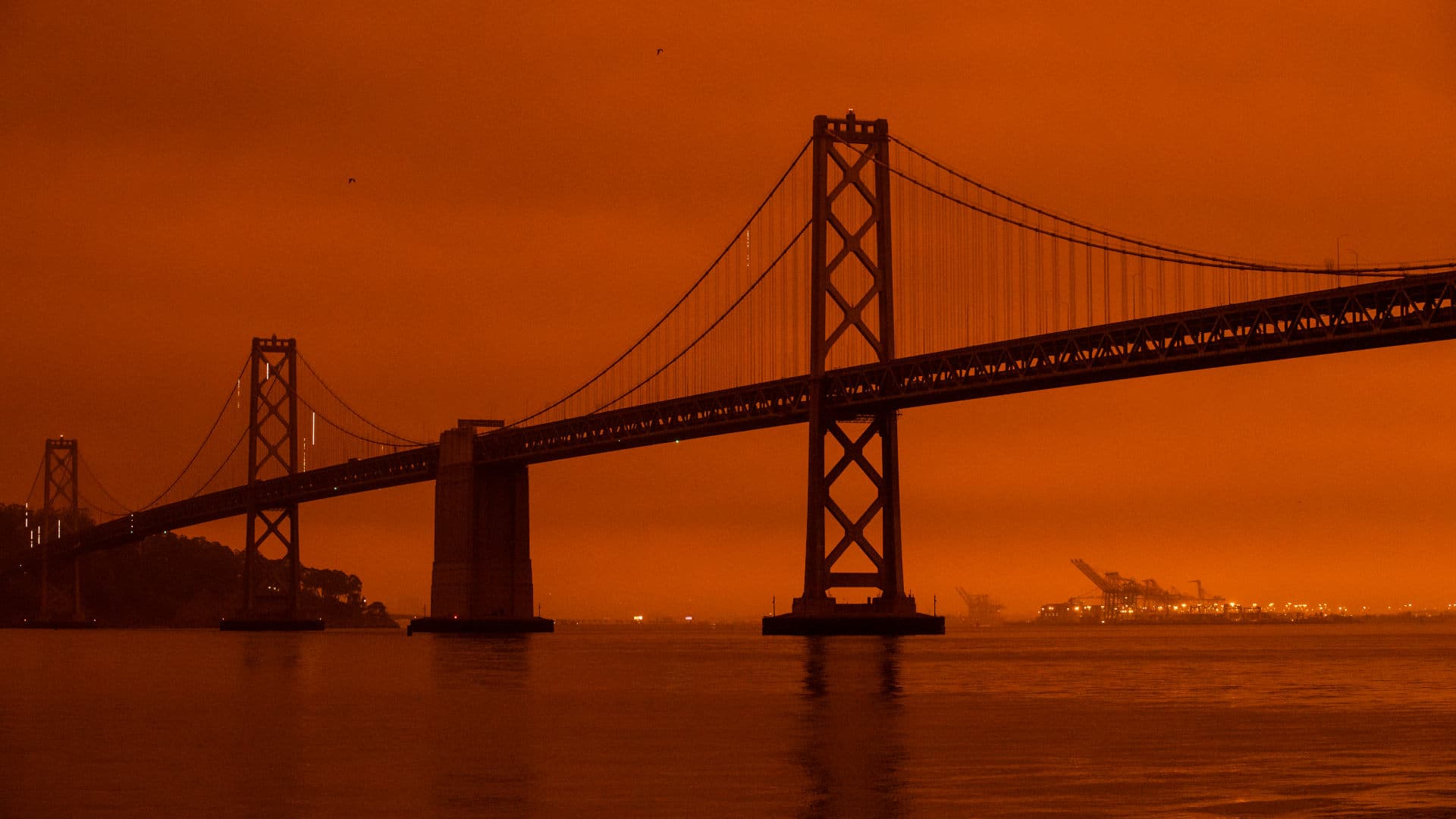 Podcast: When Wildfires and a Pandemic Collide

Like many towns across the Western U.S., Mammoth Lakes has seen a surge in outdoor recreation since the Covid-19 pandemic began. Campgrounds and short-term accommodations like AirBnb rentals closed in the Eastern Sierra with California’s first round of lockdowns. People came anyway. They parked RVs in pull-outs on roadsides and in the dirt between pines. Sometimes, they left their refuse, human waste, and poorly-extinguished campfires.

Local officials were justifiably concerned. As many as nine in 10 wildfires are human-caused. Mammoth Lakes’ Forest Service office is habituated to responding to these types of incidents. In a sagebrush flat outside of town, a recreational hunter fires a gun. A spark lands in the sagebrush; one-tenth of an acre burns. A heavy equipment operator ignites the underbrush. 65 acres burns. A mountain biker’s pedal strikes a rock as the rider leans into a turn on a tight corner. 122 acres burns.

And the campfires. To campers, the little rock-ringed flames are indispensable, an essential iconography of outdoor recreation. But the shovel and five gallons of water, which the state fire permitting agency advises should always be kept on hand, are less frequently part of the reverie of fire-building. If a fire is not fully drowned, embers can catch in the wind. And then, what was started for smores spreads, igniting the dry brush around it. A wildfire begins.

Historically there have been vanishingly few serious wildfires around Mammoth Lakes that began with a camper striking a match. Of the county’s 18 significant wildfires between 2002 and 2018, none are known to be caused by an escaped campfire, although some had inconclusive investigations. Nonetheless, campfires remain a major source of ignitions in the U.S.

Mammoth Lakes is particularly vulnerable right now. Around 44 percent of the town (as categorized by the county sheriff’s regional hazard analysis) is a high wildfire severity zone. Intense fire suppression efforts across the Sierra Nevada have increased the density of understory, forest-floor vegetation that can act as a wildfire accelerant. Plus the region is experiencing massive beetle kill and drought.

“The fuel load is super-primed to carry fire, more so than it ever has been before,” Janet Hatfield, a project manager at Plumas Corporation and at the Whitebark Institute of Interdisciplinary Environmental Sciences, both nonprofit environmental organizations, told me. In a region where every incident of ignition could wreak irreversible destruction, each new potential actor is a perceived threat. As of this May, firefighters at Inyo National Forest, which surrounds Mammoth Lakes, have already responded to 20 fires, mostly human-caused.

Here, as in much of the West, burn scars pockmark the landscape and act as a constant reminder of precarity of living through rapid — and sometimes lethal — change. It has become impossible to look away.

This fire anxiety is tender. Emotional recovery from last year’s record-shattering fire season has barely begun. Memories still linger of the Creek Fire, the state’s largest ever single-ignition burn. The cause of the Creek Fire is under investigation, but it began on a day without any lightning. Within the fire’s first few hours, it infamously came to surround dozens of tourists who needed to be evacuated via helicopter dispatches. The fire’s eastern edge sprinted, then crept, towards Mammoth Lakes, until finally it was separated from the town’s border by only a single creek and the steep-walled canyon it ran through. The flames were so close that, in an act of desperation, employees at the Mammoth Mountain Ski Area pointed the resort’s winter snow-making machines in the direction of the fire — though they ultimately were not used. In Mammoth Lakes, residents could see smoke rising from the last remnants of the Creek Fire for a third of a year, until the first big winter storm came in December.

This year, local officials are mobilizing in advance. The Eastern Sierra Dispersed Camping Collaboration (ESDCC) formed last winter to address issues related to the area’s “dramatic increase in dispersed camping,” which is legal on almost all National Forest land. (Near Mammoth Lakes, which faces one of the worst housing crises of any ski town in America, that surge has been driven in part by a growing number of unhoused locals, some of whom encamp on the nearby public lands.) Campfires outside of developed campgrounds are at the top of the ESDCC’s list of priorities.

After months of advocacy by the ESDCC and others, three counties in California — including Mono County, home to Mammoth Lakes — preemptively issued fire restrictions that took effect on May 24 banning campfires outside of fire rings or pits at designated campgrounds. There are thousands of miles of roads to camp on, and so enforcement of the restrictions will likely be spotty at best. (A campfire started in violation of the same restrictions started a 257,314 acre fire that began in nearby Stanislaus National Forest in 2013.) But the Mammoth Lakes Police Department recently invested in an all-terrain vehicle so they could traverse the rutted and washboarded rural roads on the lookout for campers.

Will it be enough? Increasingly, the threat of wildfires has put a dampening haze over everything in Mammoth Lakes. Dave Leonard, owner of the only bookshop in town, told me his sales are slightly up since last spring, and that he expects tourism to surge again this year. But it doesn’t matter, he said. “It just doesn’t feel worth the risk of losing my home after an out-of-towner starts a fire.”

Here, as in much of the West, burn scars pockmark the landscape and act as a constant reminder of precarity of living through rapid — and sometimes lethal — change. It has become impossible to look away.

Astra Lincoln is a graduate student at University of Victoria’s School of Environmental Studies, and an essayist of the West. Previous bylines include Alpinist Magazine, Rock and Ice, and Climbing Magazine.