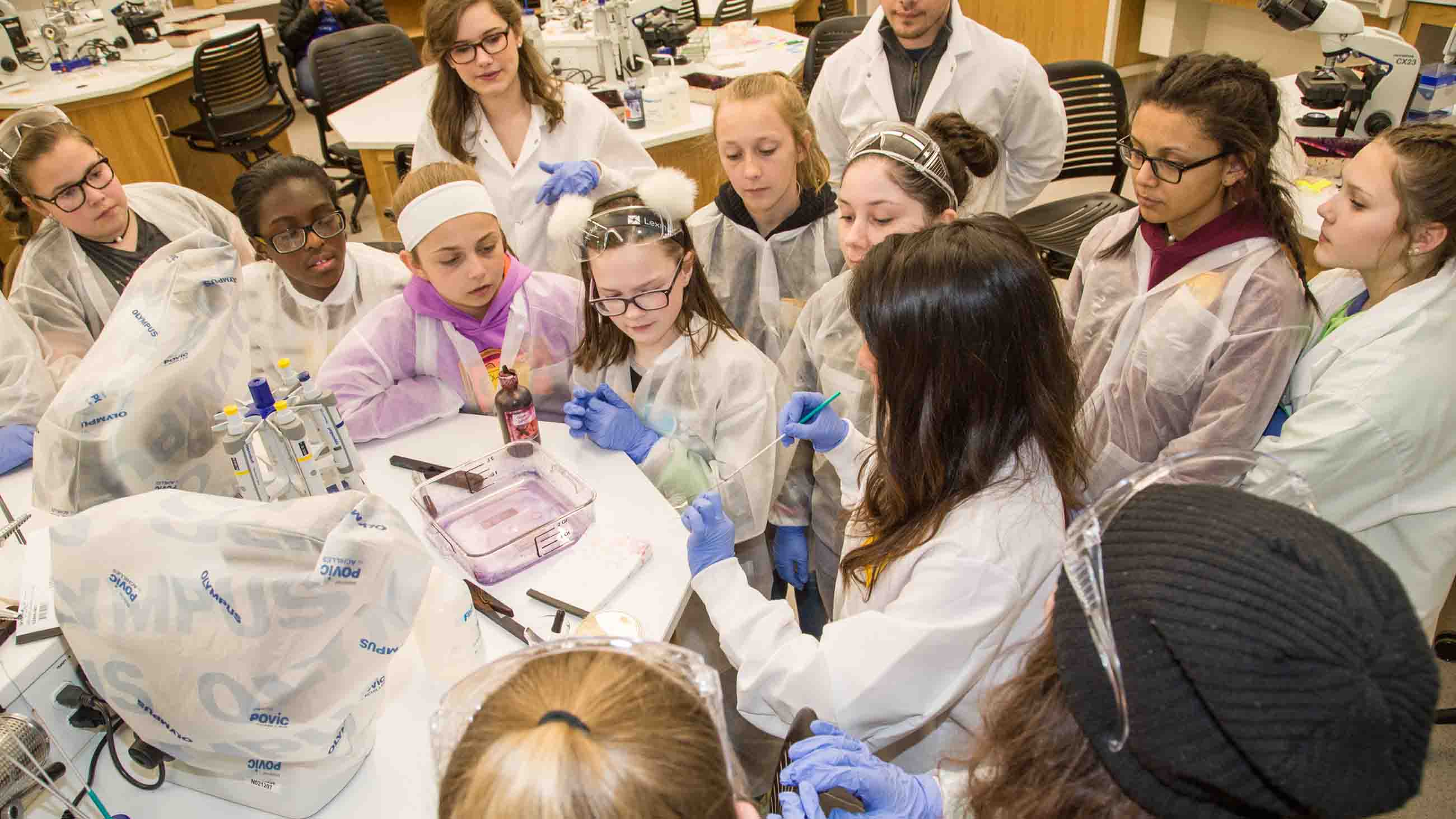 Growing up in Saudi Arabia, Aciel Eshky didn’t get the memo that science was for boys. When she was around 10 years old, her aunt started to teach her basic computer programming. From there, going on to a degree in computer science seemed like a natural fit. So when a classmate in her master’s program abroad told her that women were weaker than men at math, it came as a shock. “I was really annoyed,” Eshky says. “I felt like I was being bullied.”

Despite its dismal reputation for gender equality, Saudi Arabia has a surprising level of female graduates in the so-called STEM fields (science, technology, engineering, and mathematics). Ranked among the bottom 20 countries in the World Economic Forum’s Global Gender Gap Index in 2015, women nonetheless made up 39 percent of graduates in a cluster of “core” STEM subjects. This number is higher than Iceland’s 35 percent, even though the Nordic country ranks number one for gender equality. Norway, which has the second-highest level of gender equity, sees only 26 percent of women graduating with STEM degrees.

Taken together with these numbers, Eshky’s experience is illustrative of the so-called “gender-equality paradox” reported in a recent headline-grabbing paper: Countries ranking higher on measures of gender equality, the study found, tend to have fewer women pursuing a STEM education than those further down the gender equality ranks.

Researchers have been reporting paradoxical results like these for years, sparking debate over the best explanation for the counterintuitive findings. For the numerous organizations dedicated to tackling the problem of women’s underrepresentation in science, the answers could have implications for developing appropriate interventions, and ultimately determining the path to gender equity in countries of vastly different cultural backgrounds.

According to the recent study, which was published in the journal Psychological Science in February, much of the explanation for the paradox may come down to personal choice. Authors Gijsbert Stoet of Leeds Beckett University and David Geary at the University of Missouri, combined test score data from 67 countries and regions with related statistics on graduates in core STEM fields from the United Nations Educational, Scientific and Cultural Organization (UNESCO). Based on measured science and math ability, girls’ relative strengths in other subjects, and their confidence and interest in science, the team estimated that around 34 percent of all girls globally would be expected to graduate with STEM degrees — and yet, graduation data suggested that only 28 percent did.

In analyzing this gap, perhaps the researchers’ most surprising finding was the source of the statistical drag: countries like the Netherlands, Belgium, and Austria, where women enjoy a comparatively high degree of equality, but see far fewer female STEM graduates than their science and math scores would have suggested.

This could potentially be explained, in part, by external factors: Girls in countries with lower quality of life were more likely to go into STEM — possibly, the authors speculated, because these careers offer the best chance at financial security. In countries with a higher quality of life, they argue, a wider variety of careers are on the menu, allowing girls to opt out of STEM more often and pursue other passions.

While the testing data, pulled from the Program for International Student Assessment, notably leaves out large swaths of the globe, including most of Africa, Asia, and the Middle East, analyzing the broader sample of countries covered by the Global Gender Gap Index and UNESCO graduation statistics, Stoet says, produces the same paradoxical effect.

The results, he argues, point away from the “standard story” of the gender gap, which relies on traditional role models and discrimination, and towards personal strengths and choices as a less troubling explanation. As long as high school students are choosing subjects they like, he says, perhaps we shouldn’t be too worried: “If that means that you get fewer women in certain subjects, and more women in other subjects like psychology, it’s not necessarily a catastrophe.”

If parity is an assumed goal of activism for women in STEM, then this explanation complicates matters.

“A key tenet of modern feminism is that women will have achieved equity only when they fill at least 50 percent of the positions once filled by men,” writes Susan Pinker in the Wall Street Journal, discussing Stoet and Geary’s paper. “If women are most likely to choose STEM careers in societies that offer less equality and fewer personal freedoms,” she argues, “then that’s a steep price to pay just to say we’re 50/50.”

Still, for many activists, the goals of their work are more complex than filling every field with equal numbers of men and women for the sake of pure equality. “It’s more nuanced than that for a couple of reasons,” says Heather Metcalf, director of research and analysis at the Association for Women in Science. First, she notes, “[it] cuts out a whole population of people who identify with other genders,” and points out that parity could be measured at multiple points: “Are we talking about degrees earned? Are we talking about hiring?”

Notably, Stoet and Geary’s study only looked at STEM education, which doesn’t necessarily translate into STEM careers. In countries with a lower quality of life, for instance, jobs corresponding to education attainment may simply not exist — or may not be open to women. And even women who do pursue careers related to their field of study may be perceived by hiring committees to be at risk of prioritizing partners and children over work.

Because women are more likely to face career breaks caused by caretaking duties, they may “peak later” than men, says Jennifer Thomson, president of the Organization for Women in Science for the Developing World — a difference that might not be considered in hiring or awards processes.

For all of Stoet and Geary’s emphasis on choice driving women in countries with high gender equity to pursue degrees outside of STEM, the authors note that this cannot fully account for the disparities they found. Rather, their analysis suggests that there are girls with the grades, confidence, and the enjoyment of science to go into STEM, who still end up pursuing other careers. Advocates say understanding whether these women perceive science as a hostile environment or are influenced by gender stereotypes — including those held by their mentors and career advisors — is crucial for figuring out how best to reach them.

“Maybe there is a difference in the choices that girls and boys make,” says Shohini Ghose, a professor of physics and computer science at Wilfrid Laurier University and director of the university’s Center for Women in Science, “but any good scientist will tell you that if you want to know what the actual effect of a particular variable is in this choice, you’d better make everything else equal.”

Evening things out might eventually lead to a situation other than perfect parity, says Heather Douglas, a professor of philosophy of science at the University of Waterloo. “I can imagine a world where statistically not every field has the same number of men and the same number of women; but until we at least have representation of the number of women who do have strengths in mathematics, I don’t want to hear about it.”

Mhairi Crawford, development director at the WISE Campaign, which aims to increase the participation of women in STEM, says that it might not be a perfect proxy for measuring progress, but it still works as a target. In the U.K., “engineering has got to 11 percent,” she says. “If we can get to 40 percent women in physics, we’ll be having a party in the street.”

WISE has found preliminary evidence of success in a program that changes how STEM jobs are presented to teenagers, and has engaged external researchers to run a longitudinal study exploring whether the program had a lasting, concrete impact. But perhaps the clearest takeaway from Stoet and Geary’s findings is that culture is crucial in developing interventions.

For Eshky, the freedom to pursue computer science might look like a glimpse of gender equality, but her career choice was still restricted. As a teenager, she wanted to study architecture, a field that isn’t open to women in Saudi Arabia.

“I enjoy what I do. It’s alright,” says Eshky. But “for the last couple of years, I’ve had regrets.”

Cathleen O’Grady is a South African freelance writer currently living in Scotland and working on a Ph.D. in cognitive science. Her work on behavioral science, evolution, genetics, and open science has appeared in Ars Technica and The Guardian.