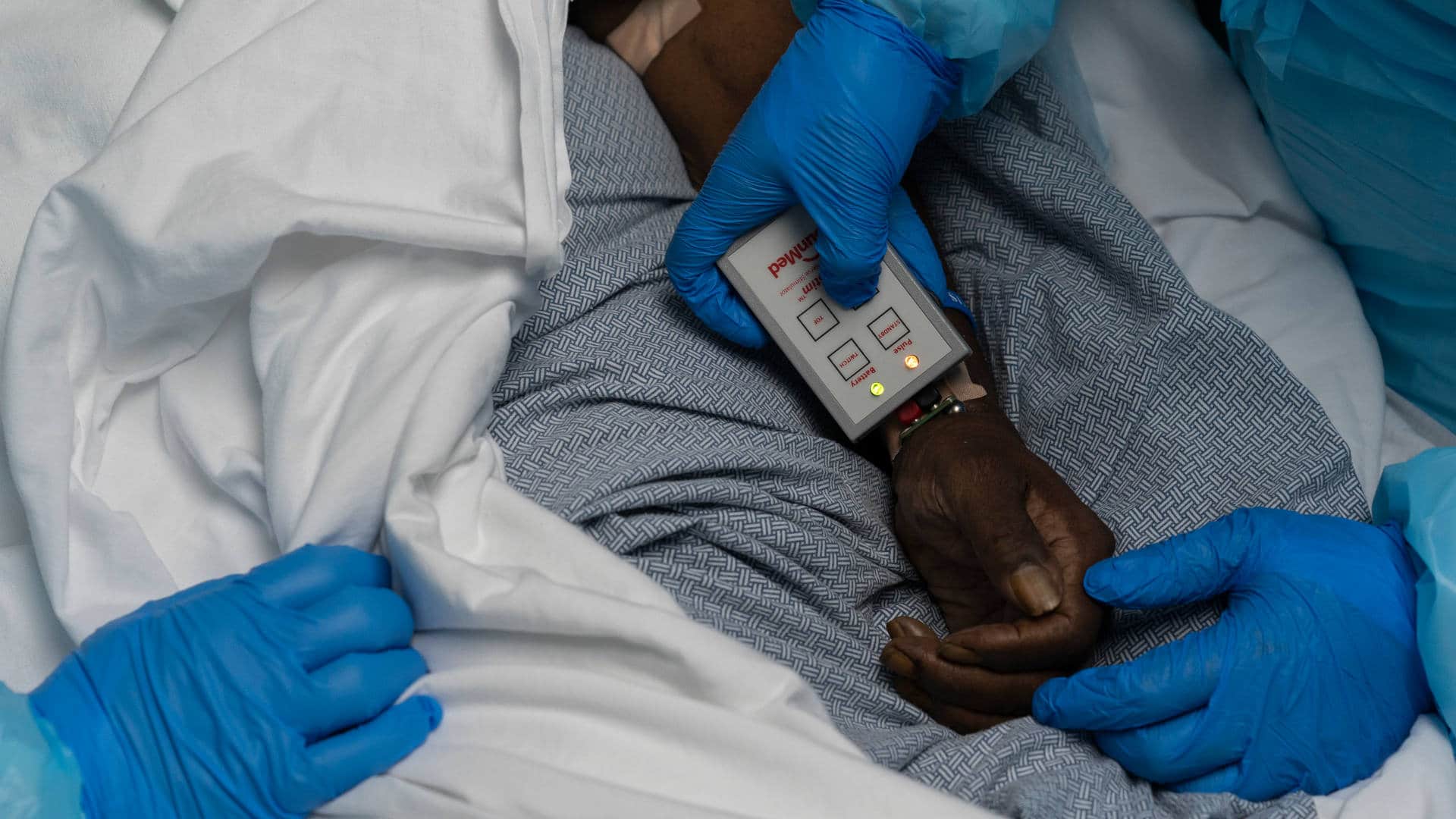 On a typical day in a typical January, around 8,400 people die in the United States, according to mortality statistics from the Centers for Disease Control and Prevention. Around one-quarter of those deaths are from heart disease, another quarter from cancer, and the rest from other causes.

So far, this is not a typical January. On Tuesday, an estimated 4,327 people died in the U.S. from complications related to the now-leading cause of death, Covid-19 — a new record for the pandemic. Around 130,000 more people lay in U.S. hospitals, battling the virus.

The majority of those people who died, federal data suggests, were of retirement age. More than one-third likely lived in nursing homes or other long-term care facilities. Quite a few lived in California, where cases have surged: “An average of 510 Californians have died every day over the past week” from Covid-19, The Mercury News reported Thursday. And many were relatively young: Nationally, around one-in-five Covid-19 fatalities are people under the age of 65. On Tuesday alone, based on those figures, those under-65 victims would have accounted for more than 800 deaths. Dozens would have been younger than 45.

No country has recorded as many Covid-19 deaths as the United States. Despite this, the dying, continuing week after week, has come to be overshadowed by other events: A looming impeachment trial in Washington, D.C.; the upcoming inauguration of president-elect Joe Biden; the threat of a new Covid-19 variant that may spread more quickly, and that is beginning to be detected across the country; and the rollout of a national vaccination campaign that, experts hope, will soon bring an end to the pandemic.

Behind it all, people keep getting very sick, and people keep dying. The fatalities are occurring despite advances in medical care. Unlike the pandemic peak in the spring, when physicians had no vetted therapies and limited firsthand experience, medical teams now have well-tested tools to treat Covid-19. Those include the antiviral drug remdesivir and simple steroids — not to mention medical knowledge accumulated through months of experience.

Still, in the U.S., daily death tolls are much higher than that they were during the panicked days of spring 2020. How such a toll came to feel normal to many Americans — and how the scale of the loss will be remembered, or not, in the years ahead — is still unclear. Indeed, it was less than a year ago that National Institute of Allergy and Infectious Diseases leader Anthony Fauci circulated an estimate that, at the time, made headlines: that between 100,000 and 240,000 Americans would die from the virus.

• The social media platform Parler went dark this week after Amazon removed the site from its web hosting service and Apple and Google booted it from their respective app stores. The companies cited the platform’s role in spreading violent messages — many of which were linked to the insurgence at the U.S. Capitol on Jan. 6. Parler, which had a reported 2.3 million active daily users and 15 million accounts, positioned itself as the free-speech alternative to Twitter and Facebook, encouraging users to “speak freely and express yourself openly, without fear of being ‘deplatformed’ for your views.” The technology giants weren’t the only companies to abandon the site, according to Parler CEO John Matze, who told Fox News’s Sunday Morning Futures: “Every vendor, from text message services to email providers, to our lawyers all ditched us too, on the same day.” Parler has since sued Amazon Web Services, citing breach of contract and antitrust violations. Some of Parler’s data may live on. According to Gizmodo, a hacker who would only be identified by the Twitter handle @donk_enby scraped Parler’s website before it went offline, archiving a reported 99.9 percent of the content. “I hope that it can be used to hold people accountable and to prevent more death,” @donk_enby told Motherboard. “I think people should be allowed to have their own opinion as long as they can act civilized, on Wednesday we saw what can happen if they don’t.” (Multiple Sources)

• Former Michigan Gov. Rick Snyder, along with his health department director Nick Lyon and seven other former officials, have been charged in connection with their handling of the Flint water crisis, which left city residents — the majority of whom are African American — exposed to elevated levels of lead. News of the charges was first reported by The Associated Press on Tuesday before details were revealed in court records posted online Thursday. Snyder, the first former governor to be charged with a crime in Michigan’s history, was charged with two counts of willful neglect of duty, misdemeanors that could result in up to a year in jail and/or a $1,000 fine. Lyon faces nine counts of involuntary manslaughter, each carrying a potential 15-year sentence and/or a $7,500 fine, along with one count of willful neglect of duty. Other officials have also been charged with involuntary manslaughter, along with perjury, extortion, and misconduct in office, among other things. Flint’s water troubles began in April 2014 when officials temporarily switched the city’s water supply from Detroit to the Flint River without treating it to guard against corrosion. Though residents noticed immediately that something was wrong, officials didn’t stop drawing water from the river until more than a year later. In addition to lead exposure, the swap has also been blamed for an outbreak of Legionnaires disease, which killed at least 12 people and sickened dozens more. (The Associated Press)

• On Thursday, an international team of experts convened by the World Health Organization to investigate the origins of the pandemic touched down in Wuhan, China, where the first cluster of coronavirus cases was detected more than a year ago. But the group quickly ran into the kind of logistical hurdles that have plagued the investigation since its inception. Two of the team’s 15 members were barred at the last minute from entering China after testing positive for coronavirus antibodies. According to a statement from the WHO, posted on Twitter, the pair will remain in Singapore and undergo retesting. While the situation may be resolved quickly, foreign health officials have previously charged the Chinese government with putting up bureaucratic hurdles to intentionally delay the probe. Earlier this year, WHO Director-General Tedros Adhanom Ghebreyesus took the rare step of publicly expressing disappointment at the delays. Both China and the WHO have touted the mission as an affirmation of their transparency and scientific rigor in tracing the source of the pandemic after criticism from other countries that their missteps allowed the virus to spread. But regardless of when the investigation begins in earnest, experts say it is no easy task to unravel the origins of a coronavirus, and it will likely be months before the WHO releases any results. (The New York Times)

• Based in part on positive results from a recent study, the U.K. government has approved the use of two anti-inflammatory drugs, most commonly used against rheumatoid arthritis, as a treatment for patients with severe cases of Covid-19. The drugs — tocilizumab and sarilumab — are recommended for use in intensive care units where patients have already been placed on ventilators. The move came shortly after researchers posted results on the preprint server medRXiv, which suggested that use of the drugs in such cases could reduce death by up to 24 percent. The study, based on some 800 patients admitted to ICU wards with Covid-19, compared survival rates between those who received the drugs and those who did not. The treatment has not been approved in the U.S., and doctors hailed it cautiously as a positive step, noting that other trials with these immunosuppressive drugs — thought to depress Covid-19 symptoms by blocking a destructive inflammatory response to infection — have not been so clear cut. “I think we need to understand why this data looks different from other studies, before we start implementing this as widespread policy,” one told The New York Times. (The Scientist)

• And finally: Astronomers are still closely monitoring a signal that seemed to emanate from the red dwarf star Proxima Centauri. Last month, the discovery of the signal, known as BLC1, leaked to The Guardian. The Parkes Observatory in Australia first observed the signal back in April and May of 2019. Based on the properties of BLC1’s specific beam of radio waves, astronomers could tell the signal was not produced by natural forces but rather by technology. This sparked speculation among news outlets, including The New York Times, over whether BLC1 could possibly be extraterrestrial in origin, considering Proxima Centauri is orbited by the exoplanet Proxima Centauri b, which is considered to be in the star’s habitable zone. However, the radio astronomers who discovered BLC1, along with other experts in the field, were quick to point out the signal could actually be from human-made technology, and that an alien origin was unlikely. The signal is a single tone “like a foghorn,” one researcher told The Atlantic, containing no information. Parkes Observatory previously mistakenly identified an unexplained signal in 1998 that, in 2015, was revealed to be from the staff’s microwave oven. (The Atlantic)