As Covid-19 cases fill emergency rooms and intensive care units across the U.S., local officials have been rushing to convert hotels, convention centers, and city parks into new hospital spaces. Amid the scramble, many physicians, architects, and health care consultants are already talking about how modern hospital designs could change to avoid a repeat of the current national crisis.

One clear lesson: Modern hospitals often lack the flexibility to accommodate a sudden surge of patients. In particular, many hospitals have been running out of space and resources to treat Covid-19 patients with severe symptoms, while at the same time handling those with mild symptoms and the asymptomatic who may infect health care workers and other patients.

In early April, Northwell launched a surge plan that expanded the number of its hospital beds from 4,000 to 5,600 over two weeks. The first stage focused on adding beds within its hospital system’s existing spaces, including a 300-seat auditorium at North Shore University Hospital on Long Island. The second involved setting up tents on hospital grounds and negotiating the use of additional space inside nursing homes, assisted living facilities, hotels, religious centers, and colleges.

These temporary hospital spaces are more likely to support isolation and medical care for milder Covid-19 cases than to fully replicate a permanent hospital’s ICU. But such modified hospital designs — similar to the temporary hospital wards and field hospitals of past outbreaks — have become necessary as the first wave of the pandemic tears through U.S. communities, and they will likely be needed again for a second wave of outbreaks. As hospital designers convert spaces for temporary use, many are identifying new opportunities for hospital systems that have traditionally emphasized lean and efficient operations. In particular, they say future hospitals should have more flexibility for pandemics and other outlier events that create temporary surges in demand every five or 10 years.

“The evolving health system is going to have a core, and the core is getting smaller because it’s where most of the resources are consumed and so we want it to run hot and be super-efficient,” says Scot Latimer, a global practice area leader at Gensler, a global design and architecture firm. “What we’re learning is that it also needs to be able to expand and contract, and that we’re probably not going to be able to afford to build for the outlier.”

To help fill the gaps, U.S. health care providers are embracing an array of temporary hospital designs. HKS Architects, an international firm headquartered in Dallas, has released concept studies for converting buildings into temporary hospital spaces in 14 days or fewer. The firm also organized an April 7 webinar on conversions with representatives of hospital systems, hotel chains, and the U.S. Army Corps of Engineers. The latter is supporting 17 projects across nine states with $1.6 billion in funding from the Federal Emergency Management Agency (FEMA).

Whatever their uses, the converted buildings still fall short of traditional hospital standards. “The most important thing to understand is you can’t be exactly a hospital with all the compliance issues and the standards and the airflows when you’re putting 500 or 600 patients in the open areas in a convention center,” says Stan Shelton, vice president of organizational development and client engagement leader at HKS Architects. “You have a lot of hospital-like activities and you will absolutely be providing health care in those spaces, but it’s not going to be exactly like a hospital.”

One limitation is that the heating, ventilation, and air conditioning systems of many converted buildings can’t recreate hospital isolation rooms. But converted sports arenas and hotels could nonetheless function as quarantine centers for milder Covid-19 cases so that hospitals can focus on the most seriously ill patients who require critical care and strict isolation.

“Maybe in a rural area they don’t have a fancy convention center, but they probably have a high school,” says Jennie Evans, development director for HKS Architects. “Every region has to determine the best way to use the resources that are available to them.”

Some temporary units resemble the open ward hospitals of the late 19th and early 20th centuries, rather than the modern U.S. designs that emphasize single-occupancy rooms. Patients housed in temporary spaces such as New York City’s Javits Convention Center, for instance, are typically in beds separated by at least six feet, the current guideline from the U.S. Centers for Disease Control and Prevention.

In fact, today’s social distancing recommendations unconsciously echo the hospital ward setup that was popularized by the trailblazing British nurse Florence Nightingale, says Jeanne Kisacky, an independent scholar and author of “Rise of the Modern Hospital.”

The wards featured open windows for fresh air and sunlight and emphasized high standards of cleanliness. “If you just think about the bed placement in a Nightingale ward, they were supposed to be six feet apart — that’s beyond a distance where one patient can reach out and touch another,” Kisacky says. “It’s the six-foot social distancing, but within one big open space.”

“You have a lot of hospital-like activities and you will absolutely be providing health care in those spaces, but it’s not going to be exactly like a hospital.”

The Nightingale ward system generally worked as long as hospital staff maintained hygiene and closely supervised patients. But in 1918, the savage Spanish flu pandemic hit and the dangers of packing hospitals end-to-end with patients became apparent. In the decades that followed, hospital design began gradually shifting away from wards to single bedrooms to minimize the spread of disease, Kisacky explains. Early examples appeared in New York City’s Fifth Avenue Hospital and Beth Israel Hospital, which opened in 1921 and 1929, respectively, but it took decades before it became the standard for hospitals across the U.S.

Still, the unintentional replication of the Nightingale ward could prove effective for handling mild Covid-19 cases, which can be safely isolated together in groups. Evans at HKS Architects went so far as to praise Nightingale as the first health care architect.

As for traditional hospitals, the shortage of beds seen in Covid-19 hotspots across the country is a byproduct of decisions made by the U.S. government and private health care systems over the last several decades, which have focused on cutting costs and eliminating perceived excess hospital capacity. An emphasis on delivering health care services closer to home and outside the hospital has also been a factor.

The drive for efficiency has decreased the length of time patients spend in hospitals along with the number of rooms normally considered necessary, says Randy Guillot, design director at Gensler. “All that is a really good thing, except when you don’t look at how to expand and contract in a way that is societally responsible.”

Gensler has been helping hospital systems figure out how to convert existing examination rooms to accommodate additional emergency beds. Similarly, the firm is supporting contractors working with the U.S. Army Corps of Engineers and FEMA on projects such as building a 200-bed field hospital in Van Cortlandt Park in the Bronx neighborhood of New York City. But Gensler is also guiding clients on how future hospitals could be designed like the bellows used to stoke fires, temporarily expanding capacity during emergencies and contracting when they’re over, Guillot says. 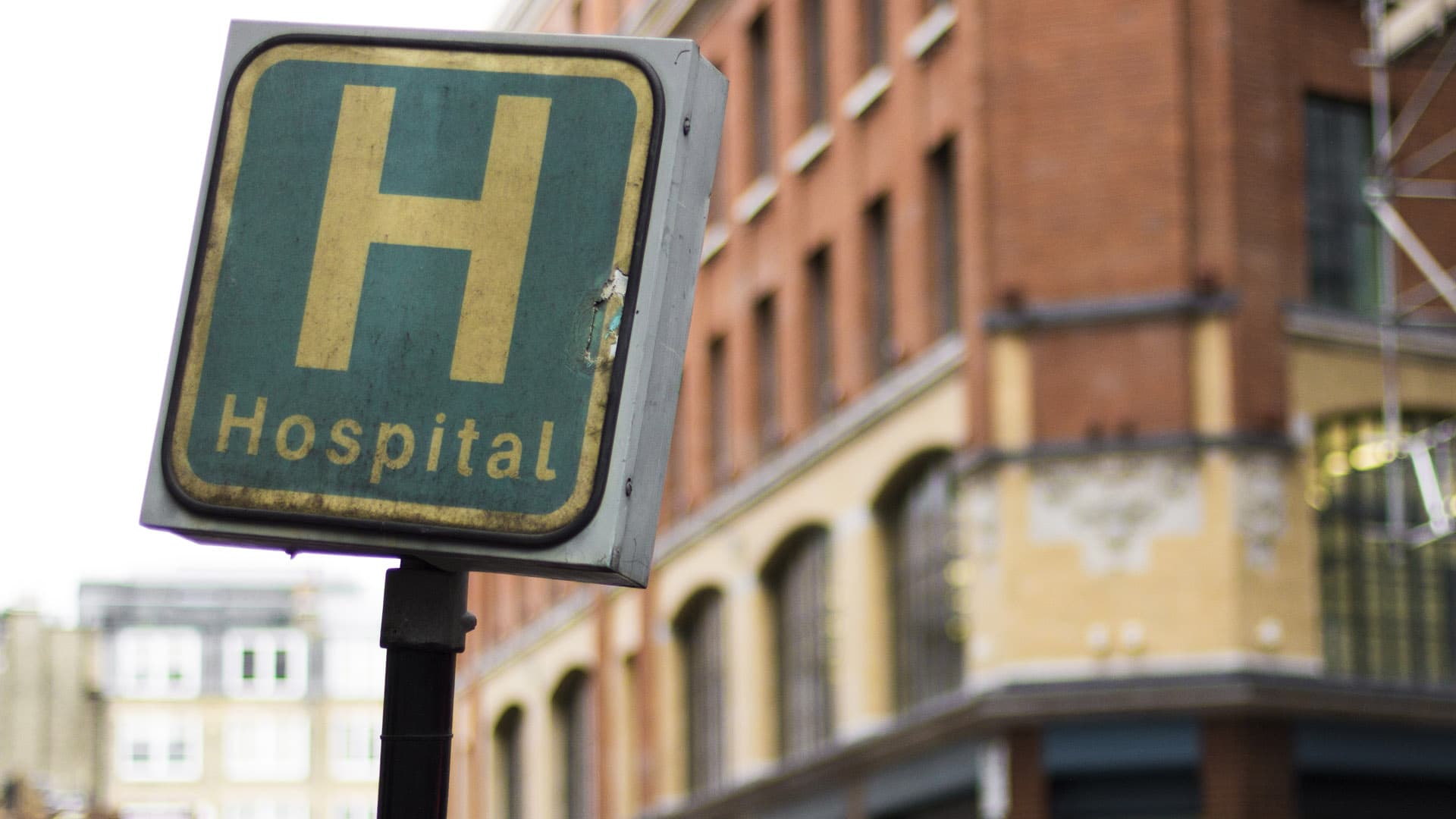 One example is Rambam Hospital in Haifa, Israel, which can convert its underground parking garage into a 2,000-bed hospital in wartime. Another is Rush University Medical Center in Chicago, which can expand both emergency department capacity and the number of isolation rooms when needed.

During normal operations, Rush has 40 negative-pressure rooms that help prevent the spread of potentially infectious diseases through the air. Each room has a negative pressure compared to the outside hallway, which means that air flows from the hallway into the room and then exits the hospital through a HEPA filter. But the hospital can also convert an additional wing into a negative-pressure ward capable of accommodating an additional 32 patients. The emergency department also has three 20-bed units — called pods — that can each be isolated to handle even more potentially infectious patients.

In March, as the number of Covid-19 patients rose in the Chicago area, Rush switched one of its pods to negative pressure, says Anthony Perry, vice president of ambulatory transformation for the hospital. Staff also began screening patients arriving in the emergency department’s large ambulance bay to quickly separate suspected Covid-19 patients from others and direct them to isolated parts of the hospital.

Perry credits the hospital for involving clinicians in the original design, where they helped think through potential bioterrorism and pandemic scenarios. But hospital administrators don’t always see the importance of having clinicians at the table early on, says Diana Anderson, a geriatric medicine fellow at the University of California, San Francisco, and founder of Dochitect, a health care design consultancy informed by both medicine and architecture.

Anderson also thinks it’s important for facilities like Rush to document operating procedures during the Covid-19 pandemic in order to inform hospital design going forward. “What will be important is for those facilities that have been built with pandemic preparedness in mind to study their outcomes during Covid-19,” Anderson says. This way, architects can turn to the research when “making the case for evidence-based design.”

The Covid-19 pandemic is also exposing new needs for hospitals that neither open wards nor more flexible capacity can address. For instance, hospital designers and architects are discussing the need for touch-free control for lighting, temperature, and other building functions, to help avoid spreading diseases on these highly used surfaces. Building with materials that are less hospitable to microbes, such as copper, may also reduce the risk of surface transmission. Some hospitals have already eliminated window curtains, which can become easily contaminated, by installing windows made of e-switchable privacy glass — also known as e-glass or smart glass — which can switch between translucent and opaque and are easy to clean.

“I think we as designers need to come up with ways to stay connected to loved ones and design and build that into our spaces,” Anderson says. “I think preventing dying alone should be paramount.”

Hospital design can also do more for health care workers. Even as the public has hailed nurses and physicians as heroes, hospitals have moved toward eliminating sleeping quarters for hospital staff and reducing the number and size of break rooms and rest areas, Anderson says. The current pandemic has shown the need for giving health care workers a place to rest in between grueling shifts, especially given reports of nurses and physicians sleeping in camper vehicles and avoiding their homes to protect their families from possible infection.

Break rooms and rest areas for hospital staff usually only come up at the end of discussions about designing and building hospitals, Anderson explains. As both a physician and architect, she sees such spaces as hugely important in both permanent hospitals and in the newly converted spaces.

“I think what our clinicians go through is usually emotional and stressful,” Anderson says. “And we have to build environments where we can go and have moments of respite and connect with loved ones, meditate, or just take a moment to ourselves.”

UPDATE: An earlier version of this piece included an outdated title for Dr. Anthony Perry. He is now the vice president of ambulatory transformation at Rush University Medical Center. The piece also described Gensler as a Chicago-based firm. The company does not have a headquarters, but has offices worldwide.

Jeremy Hsu is a freelance journalist based in New York City. He frequently writes about science and technology.