Since the first factories began manufacturing polyester from petroleum in the 1950s, humans have produced an estimated 9.1 billion tons of plastic. Of the waste generated from that plastic, less than a tenth of that has been recycled, researchers estimate. About 12 percent has been incinerated, releasing dioxins and other carcinogens into the air. Most of the rest, a mass equivalent to about 35 million blue whales, has accumulated in landfills and in the natural environment. Plastic inhabits the oceans, building up in the guts of seagulls and great white sharks. It rains down, in tiny flecks, on cities and national parks. According to some research, from production to disposal, it is responsible for more greenhouse gas emissions than the aviation industry.

This pollution problem is made worse, experts say, by the fact that even the small share of plastic that does get recycled is destined to end up, sooner or later, in the trash heap. Conventional, thermomechanical recycling — in which old containers are ground into flakes, washed, melted down, and then reformed into new products — inevitably yields products that are more brittle, and less durable, than the starting material. At best, material from a plastic bottle might be recycled this way about three times before it becomes unusable. More likely, it will be “downcycled” into lower value materials like clothing and carpeting—materials that will eventually be disposed of in landfills. Opinion: Our Big Problem With Microplastic

“Thermomechanical recycling is not recycling,” said Alain Marty, chief science officer at Carbios, a French company that is developing alternatives to conventional recycling.

“At the end,” he added, “you have exactly the same quantity of plastic waste.”

Carbios is among a contingent of startups that are attempting to commercialize a type of chemical recycling known as depolymerization, which breaks down polymers — the chain-like molecules that make up a plastic — into their fundamental molecular building blocks, called monomers. Those monomers can then be reassembled into polymers that are, in terms of their physical properties, as good as new. In theory, proponents say, a single plastic bottle could be recycled this way until the end of time.

But some experts caution that depolymerization and other forms of chemical recycling may face many of the same issues that already plague the recycling industry, including competition from cheap virgin plastics made from petroleum feedstocks. They say that to curb the tide of plastic flooding landfills and the oceans, what’s most needed is not new recycling technologies but stronger regulations on plastic producers — and stronger incentives to make use of the recycling technologies that already exist.

Buoyed by potentially lucrative corporate partnerships and tightening European restrictions on plastic producers, however, Carbios is pressing forward with its vision of a circular plastic economy — one that does not require the extraction of petroleum to make new plastics. Underlying the company’s approach is a technology that remains unconventional in the realm of recycling: genetically modified enzymes.

Enzymes catalyze chemical reactions inside organisms. In the human body, for example, enzymes can convert starches into sugars and proteins into amino acids. For the past several years, Carbios has been refining a method that uses an enzyme found in a microorganism to convert polyethylene terephthalate (PET), a common ingredient in textiles and plastic bottles, into its constituent monomers, terephthalic acid, and mono ethylene glycol.

Although scientists have known about the existence of plastic-eating enzymes for years — and Marty says Carbios has been working on enzymatic recycling technology since its founding in 2011 — a discovery made six years ago outside a bottle-recycling factory in Sakai, Japan helped to energize the field. There, a group led by researchers at the Kyoto Institute of Technology and Keio University found a single bacterial species, Ideonella sakaiensis, that could both break down PET and use it for food. The microbe harbored a pair of enzymes that, together, could cleave the molecular bonds that hold together PET. In the wake of the discovery, other research groups identified other enzymes capable of performing the same feat.

Enzymatic recycling’s promise isn’t limited to PET; the approach can potentially be applied to other plastics, including polyurethane, used in in foam, insulation, and paint. But PET offers perhaps the most expansive commercial opportunity: It is one of the largest categories of plastics produced, widely used in food packaging and fabrics. PET-based beverage bottles are among the easiest plastics to collect and recycle into a marketable product. Traditional depolymerization technologies rely on inorganic catalysts rather than enzymes. But some chemical recycling companies have struggled in efforts to turn PET recycling into a viable business model — with some even facing legal scrutiny.

Despite this, Marty says that Carbios’ enzyme-based approach offers advantages over traditional depolymerization methods: The enzymes are more chemically selective than synthetic catalysts — they can more precisely target specific sites on specific molecules — and could therefore yield purer product. Plus they work at relatively low reactor temperatures and do not require expensive, hazardous solvents.

Traditionally, however, the problem with enzymes has been that they work slowly and can destabilize under heat. In early experiments, it sometimes took weeks to process just a fraction of a batch of PET. In 2020, Marty and colleagues at Carbios, along with researchers in France, announced that they had engineered an enzyme — a so-called cutinase, naturally found in microbes that decompose leaves — that could withstand warmer temperatures and convert nearly an entire batch of PET into monomers in a matter of hours. The discovery dramatically boosted enzymatic recycling’s commercial prospects; In the 10 months that followed, Carbios’ stock price on the Euronext Paris exchange grew about eightfold.

Last September, Carbios began testing its technology at a demonstration facility near its headquarters in Clermont-Ferrand, France, about a two-hour drive west of Lyon. Used PET arrives here as thin, pre-processed flakes about one-fifth of an inch across. In a 16-foot-tall reactor, the flakes are mixed with the patented cutinase enzymes —produced by Denmark-based biotechnology company Novozymes — and warmed to a little above 140 degrees Fahrenheit. Within 10 hours, Marty says, 95 percent of the plastic fed to the reactor, the equivalent of 100,000 plastic bottles, can be converted into monomers, which are then filtered, purified, and prepared for use in plastic manufacturing. (The remaining 5 percent, made up of unreacted plastic and impurities, is incinerated.) As Marty describes it, the end product is physically indistinguishable from the petrochemical-based substances used to manufacture virgin PET.

Carbios’ recycling technology has grabbed the attention of some of the world’s largest consumer goods companies. L’Oréal, Nestlé, and PepsiCo have collaborated with the startup to produce proof-of-concept bottles, and all seem intent on eventually putting enzyme-recycled plastic on shelves.

But Kate Bailey, the policy and research director at Eco-Cycle, a nonprofit recycler based in Colorado, says that over her 20 years in the recycling industry, she has grown skeptical of biotechnology fixes like the one being touted by Carbios. While she acknowledges that new solutions are needed, given the urgency of the plastic problem, she says “we don’t have more years to figure this out and wait for new technology.” Bailey points to lingering questions about how enzymatic recycling will be scaled up to handle commercial volumes, including questions about its energy footprint and its handling of toxic chemical additives found in many consumer plastics.

Marty concedes that Carbios’ process is, indeed, more energy-intensive than conventional recycling — he declined to specify by how much — but added that it’s not fair to compare enzymatic recycling with thermomechanical processes, which don’t produce as high quality of a recycled product and eventually result in the same quantity of waste. Still, he said, it requires less energy, and releases less greenhouse gas, than producing virgin PET from petroleum — claims that are supported by an independent analysis published last year by the U.S. National Renewable Energy Laboratory. As for additives, he says they are filtered out during post-reaction processing and incinerated. 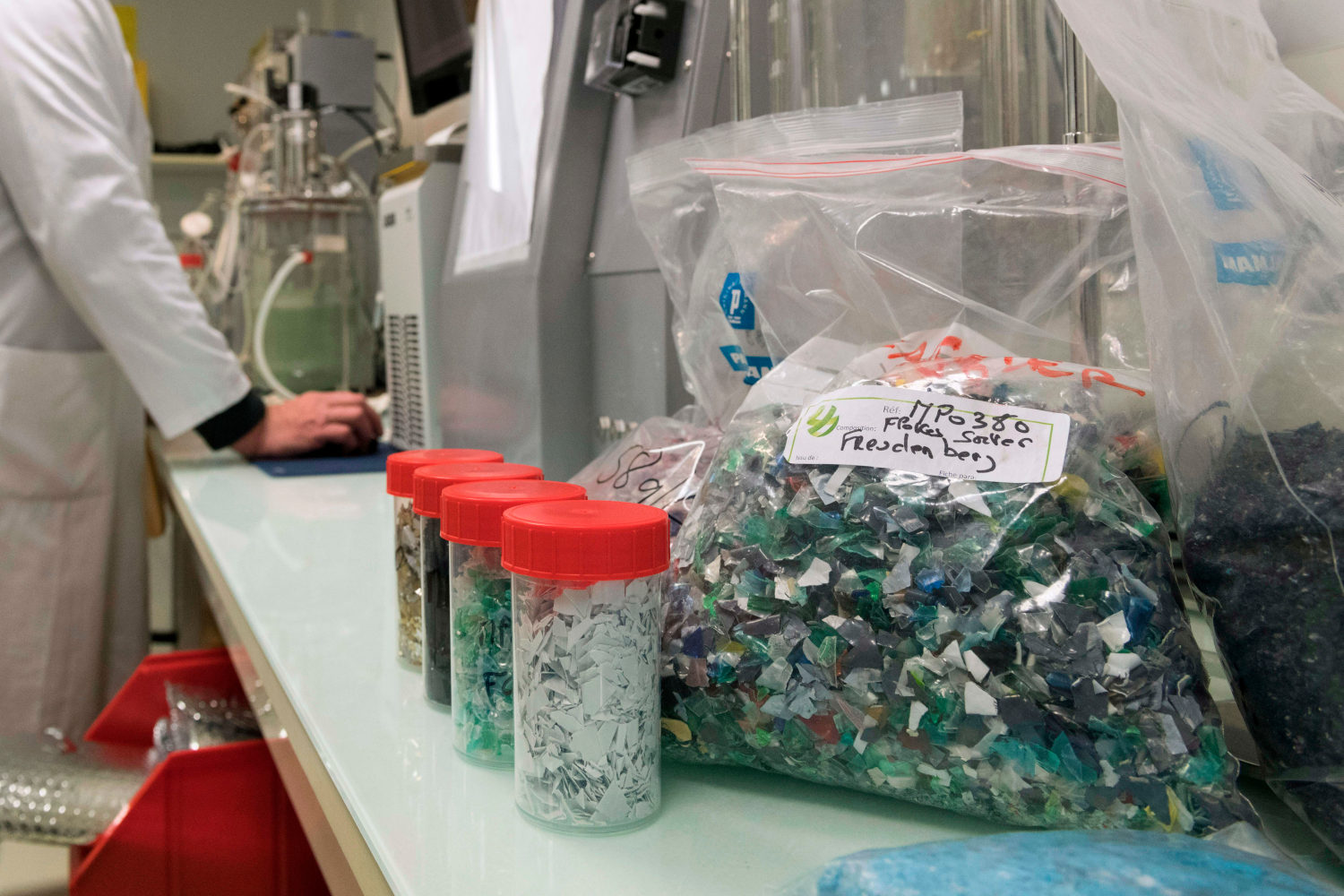 In the Carbios demonstration plant, PET flakes and the patented cutinase enzymes mix in the large reactor tank on the right. Within 10 hours, 95 percent of the plastic is converted into monomers, Marty says. Visual: Carbios

But the most stubborn hurdle for Carbios and other enzymatic recycling hopefuls may be an economic one. “It’s super cheap to make virgin plastic, especially with the low price of oil,” said Bailey.

“You have to be able to sell your recycled PET against to some company that also has the option of buying virgin PET,” she added, “and when virgin is just cheaper, then that’s what companies buy.”

In its analysis, the National Renewable Energy Laboratory estimated that PET monomers produced through enzymatic recycling would carry a price of at least $1.93 per kilogram; virgin, petroleum-based monomers have ranged between $0.90 and $1.50 per kilogram since 2010. And now that many fossil fuel companies are pivoting their business models toward plastic production, the market competition for plastic recyclers could grow even stiffer.

Marty, however, is optimistic about his company’s prospects. He points out that the price of oil is rising and that tightening regulations on the use of fossil fuels in Europe is making recycled plastic more competitive there. Several consumer goods giants have publicly committed to sourcing more of their products from recycled materials: Coca-Cola pledged to use recycled material for half of its packaging by 2030, and Unilever aims to cut its reliance on virgin plastic in half by 2025.

“At the beginning, sure, it will be a little more costly,” Marty said. “But we will reduce, with experience, the cost of this recycled PET.”

Wolfgang Streit, a microbiologist at the University of Hamburg, says that even if companies achieve commercial success with PET, some polymers may never be amenable to the enzymatic recycling. Polymers like polyvinylchloride, used in PVC pipes, and polystyrene, used in Styrofoam, are held together by powerful carbon-carbon bonds, which might be too sturdy for enzymes to overcome, he explains.

That’s one reason Bailey believes new policies need to be considered alongside new technologies in addressing the global plastic waste problem. She advocates for measures that limit the production of hard-to-recycle plastics and improve collection rates for materials like PET, which can be recycled, albeit imperfectly, with existing technologies. Bailey notes that currently only about three in 10 PET bottles gets collected for recycling. She describes that as low-hanging fruit “that we could solve today with proven technology and policies.”

Now that many fossil fuel companies are pivoting their business models toward plastic production, the market competition for plastic recyclers could grow even stiffer.

Most PET produced globally is used not for bottles but for textile fibers, which, because they often contain blended materials, are rarely recycled at all. Mats Linder, the head of the consulting arm of Stena Recycling in Sweden, said he’d like to see chemical recycling technologies focus on these and other parts of the recycling industry where conventional recycling is coming up short.

As it happens, Carbios is working to do just that, Marty says. The French company Michelin has validated the company’s technology, which could allow it to recycle used textiles and bottles into tire fibers. It aims to launch a textile recycling operation in 2023, and Marty says the company is on track to launch a 44,000-ton-capacity industrial scale facility in 2025.

Gregg Beckham, a senior research fellow at the National Renewable Energy Laboratory, believes the global plastic problem will call for a diverse mix of technological and policy solutions, but he says enzymatic recycling and other chemical recycling technologies are advancing rapidly, and he’s optimistic that they will have a role to play. “I think chemical recycling is useful in the contexts where other solutions don’t work,” he said. “And there are many places where other solutions don’t work.”

Ula Chrobak is a freelance science writer based in Nevada. You can find more of her work at her website.