Eighteen months into the Covid-19 pandemic, with the delta variant fueling a massive resurgence of disease, many hospitals are hitting a heartbreaking new low. They’re now losing babies to the coronavirus.

The first reported Covid-related death of a newborn occurred in Orange County, Florida, and an infant has died in Mississippi. Merced County in California lost a child under a year old in late August.

“It’s so hard to see kids suffer,” said Paul Offit, an expert on infectious diseases at Children’s Hospital of Philadelphia, which — like other pediatric hospitals around the country — has been inundated with Covid patients.

Until the delta variant laid siege this summer, nearly all children seemed to be spared from the worst ravages of Covid, for reasons scientists didn’t totally understand.

Although there’s no evidence the delta variant causes more severe disease, the virus is so infectious that children are being hospitalized in large numbers — mostly in states with low vaccination rates. Nearly 30 percent of Covid infections reported for the week that ended Sept. 9 were in children, according to the American Academy of Pediatrics. 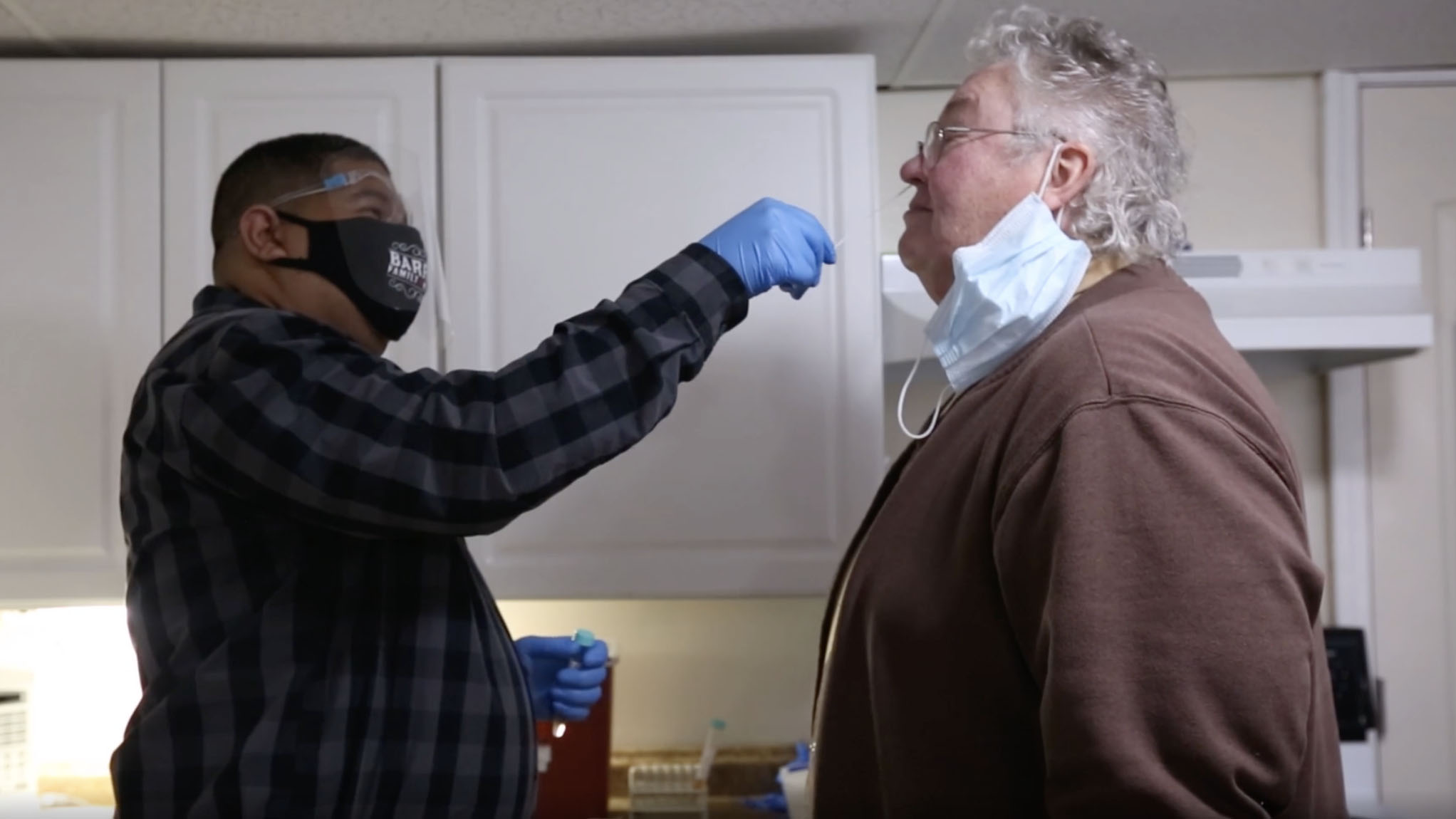 Doctors diagnosed more than 243,000 cases in children in the same week, bringing the total number of Covid infections in kids under 18 since the onset of the pandemic to 5.3 million, with at least 534 deaths.

Experts say it’s a question of basic math. “If 10 times as many kids are infected with delta than previous variants, then, of course, we’re going to see 10 times as many kids hospitalized,” said Dimitri Christakis, director of the Center for Child Health, Behavior, and Development at the Seattle Children’s Research Institute.

But the latest surge gives new urgency to a question that has mystified scientists throughout the pandemic: What protects most children from becoming seriously ill? And why does that protection sometimes fail?

“This is an urgent and complex question,” said Bill Kapogiannis, senior medical officer and infectious-disease expert at the Eunice Kennedy Shriver National Institute of Child Health and Human Development.

“We are doing everything we can to address it, using all the tools we have available,” Kapogiannis said. “Answers can’t come soon enough.”

For much of the pandemic, doctors could only guess why children’s immune systems were so much more successful at rebuffing the coronavirus.

Despite the alarming number of hospitalized children in the recent surge, young people are much less likely to become critically ill. Fewer than 1 percent of children diagnosed with Covid are hospitalized and about 0.01 percent die — rates that haven’t changed in recent months, according to the American Academy of Pediatrics. Most children shrug off the virus with little more than a sniffle.

A growing body of evidence suggests that kids’ innate immune systems usually nip the infection early on, preventing the virus from gaining a foothold and multiplying unchecked, said Lael Yonker, an assistant professor of pediatrics at Massachusetts General Hospital.

In a series of studies published in the past year, the husband-and-wife team of Betsy and Kevan Herold found that children have particularly strong mucosal immunity, so called because the key players in this system are not in the blood but in the mucous membranes that line the nose, throat and other parts of the body that frequently encounter germs.

These membranes act like the layered stone walls that protected medieval cities from invaders. They’re made of epithelial cells — these also line many internal organs — which sit side by side with key soldiers in the immune system called dendritic cells and macrophages, said Betsy Herold, chief of the division of pediatric infectious diseases at the Albert Einstein College of Medicine.

Like soldiers who kill their comrades with friendly fire, a hyperactive immune system can cause collateral damage, triggering an inflammatory cascade that tramples not just viruses, but also healthy cells throughout the body.

Significantly, these cells are covered in proteins — called pattern recognition receptors — that act like sentries, continuously scanning the landscape for anything unusual. When the sentries notice something foreign — like a new virus — they alert cells to begin releasing proteins called interferons, which help coordinate the body’s immune response.

In an August study in Nature Biotechnology, Roland Eils and his colleagues at Germany’s Berlin Institute of Health found that kids’ upper airways are “pre-activated” to fight the novel coronavirus. Their airways are teeming with these sentries, including ones that excel at recognizing the coronavirus.

That allows kids to immediately activate their innate immune system, releasing interferons that help shut down the virus before it can establish a foothold, Eils said.

In comparison, adults have far fewer sentinels on the lookout and take about two days to respond to the virus, Eils said. By that time, the virus may have multiplied exponentially, and the battle becomes much more difficult.

When innate immunity fails to control a virus, the body can fall back on the adaptive immune system, a second line of defense that adapts to each unique threat. The adaptive system creates antibodies, for example, tailored to each virus or bacterium the body encounters.

While antibodies are some of the easiest pieces of the immune response to measure, and therefore often cited as proxies for protection, kids don’t seem to need as many to fight Covid, Betsy Herold said. In fact, the Herolds’ research shows that children with Covid have fewer neutralizing antibodies than adults. (Both kids and adults usually make enough antibodies to thwart future coronavirus infections after natural infection or vaccination.)

While the adaptive immune system can be effective, it can sometimes cause more harm than good.

Like soldiers who kill their comrades with friendly fire, a hyperactive immune system can cause collateral damage, triggering an inflammatory cascade that tramples not just viruses, but also healthy cells throughout the body.

In some Covid patients, uncontrolled inflammation can lead to life-threatening blood clots and acute respiratory distress syndrome, which occurs when fluid builds up in the air sacs of the lung and makes it difficult to breathe, Betsy Herold said. Both are common causes of death in adult Covid patients.

Because kids typically clear the coronavirus so quickly, they usually avoid this sort of dangerous inflammation, she said.

Research shows that healthy children have large supplies of a type of peacekeeper cell, called innate lymphoid cells, that help calm an overactive immune system and repair damage to the lungs, said Jeremy Luban, a professor at the University of Massachusetts Medical School.

Kids are born with lots of these cells, but their numbers decline with age. And both children and adults who are sick with Covid tend to have fewer of these repair cells, Luban said.

Men also have fewer repair cells than women, which could help explain why males have a higher risk of dying from Covid than females.

Both children and adults can develop “long Covid,” the lingering health issues experienced by about 10 percent of younger adults and up to 22 percent of those 70 and older. Studies suggest that 4 percent to 11 percent of kids have persistent symptoms.

Scientists have fewer clues about what goes wrong in certain children with Covid, said Kevan Herold, who teaches immunobiology at the Yale School of Medicine.

Research suggests that children have more robust innate immune systems than adults because they have experienced so many recent respiratory infections, within their first few years, which may prime their immune systems for subsequent attacks.

But not all children shrug off Covid so easily, Eils said. Newborns haven’t been alive long enough to prime their immune systems for battle. Even toddlers may fail to mount a strong response, he said.

At Children’s Hospital New Orleans, half of Covid patients are under 4, said Mark Kline, a specialist in infectious diseases and physician-in-chief.

“We’ve had babies as young as 7 weeks, 9 weeks old in the ICU on ventilators,” Kline said. “We had a 3-month-old who required ECMO,” or extracorporeal membrane oxygenation, in which the patient is connected to a machine similar to the heart-lung bypass machine used in open-heart surgery.

But studies have found that 30 percent to 70 percent of children hospitalized with Covid had underlying conditions that increase their risk, such as Down syndrome, obesity, lung disease, diabetes or immune deficiencies. Premature babies are also at higher risk, as are children who’ve undergone cancer treatment.

One thing hospitalized kids have in common is that almost none are vaccinated, said Mary Taylor, chair of pediatrics at the University of Mississippi Medical Center.

“There’s really no way to know which child with Covid will get a cold and be just fine and which child will be critically ill,” Taylor said. “It’s just a very helpless sensation for families to feel like there is nothing they can do for their child.”

Although scientists have identified genetic mutations associated with severe Covid, these variants are extremely rare.

Scientists have had more success illuminating why certain adults succumb to Covid.

Some cases of severe Covid in adults, for example, have been tied to misguided antibodies that target interferons, rather than the coronavirus. An August study in ScienceImmunology reported that such “autoantibodies” contribute to 20 percent of Covid deaths.

Autoantibodies are very rare in children and young adults, however, and unlikely to explain why some youngsters succumb to the disease, said study co-author Isabelle Meyts, a pediatric immunologist at the Catholic University of Leuven in Belgium.

One thing hospitalized kids have in common is that almost none are vaccinated, said Mary Taylor, chair of pediatrics at the University of Mississippi Medical Center.

Although hospitalizations are declining nationwide, some of the most serious consequences of infection are only now emerging.

Two months into the delta surge, hospitals throughout the South are seeing a second wave of children with a rare but life-threatening condition called multisystem inflammatory syndrome, or MIS-C.

Unlike kids who develop Covid pneumonia — the major cause of hospitalizations among children — those with MIS-C typically have mild or asymptomatic infections but become very ill about a month later, developing symptoms such as nausea, vomiting, a rash, fever, and diarrhea. Some develop blood clots and dangerously low blood pressure. More than 4,661 children have been diagnosed with MIS-C and 41 have died, according to the Centers for Disease Control and Prevention.

Although scientists still don’t know the exact cause of MIS-C, research by Yonker of Massachusetts General and others suggests that viral particles may leak from the gut into the bloodstream, causing a system reaction throughout the body.

Although an August study in The Lancet shows that delta doubles the risk of hospitalization in adults, scientists don’t know whether that’s true for kids, said Anthony Fauci, the country’s top infectious-disease official.

“We certainly don’t know at this point whether children have more severe disease, but we’re keeping our eye on it,” he said.

To protect children, Fauci urged parents to vaccinate themselves and children age 12 and up. As for children too young for Covid shots, he said, “the best way to keep them safe is to surround them by people who are vaccinated.”