Last month, Ajmal Omari found himself stuck in a taxi, waiting at one of the many Taliban checkpoints that have proliferated across Afghanistan over the past year. Omari, a 34-year-old journalist, was traveling with his father, who was weak and breathless after having contracted Covid-19. The father and son live near a large private hospital in Baghlan Province in northern Afghanistan, but traffic was backed up as far as the eye could see. That traffic jam, it turns out, was by design. The Taliban had erected the checkpoint to hold travelers hostage while the Afghan Air Force conducted a military operation against the group. Omari, his father, and hundreds of others caught in the long snaking line of vehicles were being used as human shields. 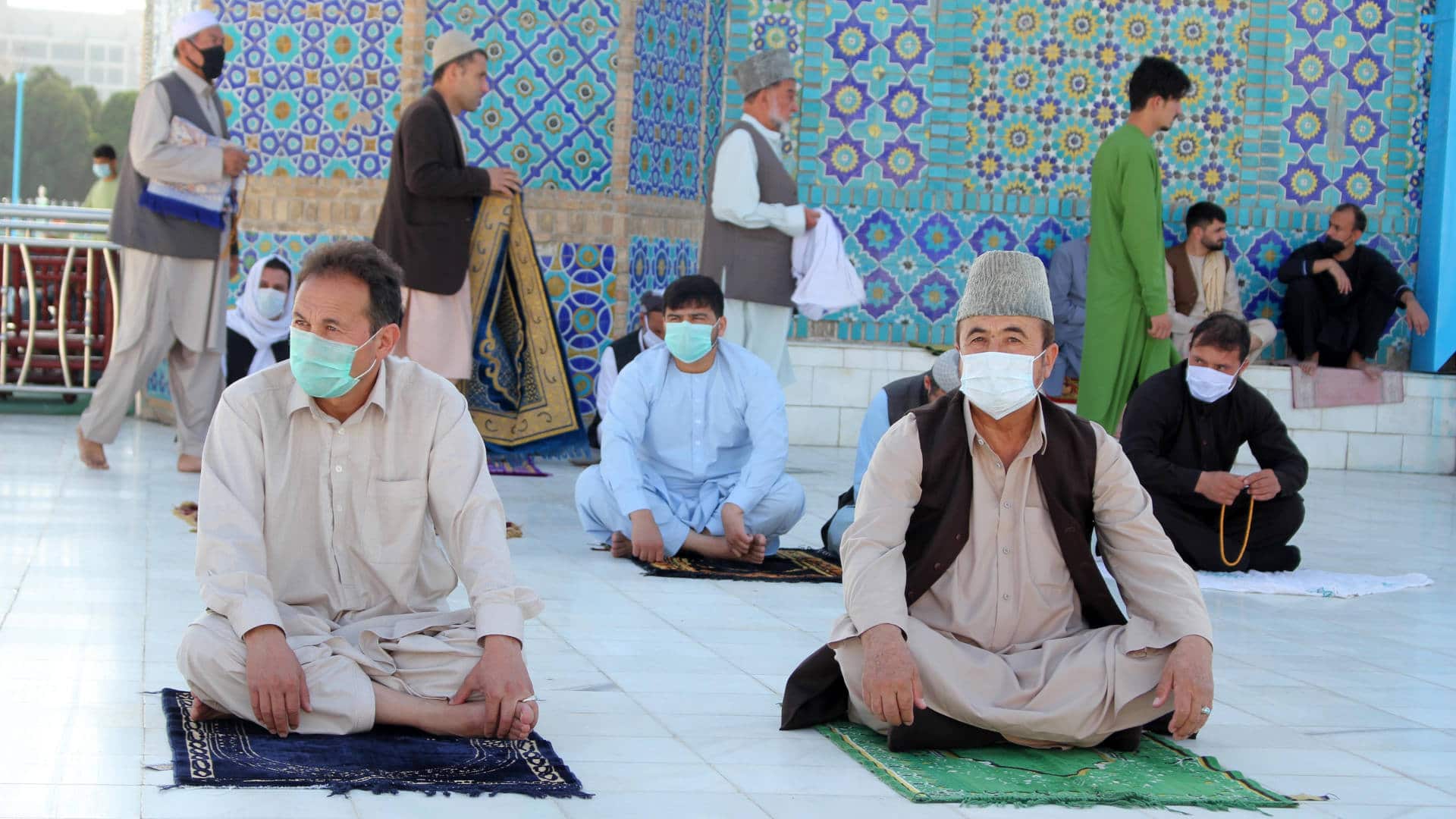 According to Omari, when a Taliban fighter approached the taxi, one of the other passengers — an employee of the Afghan government — bolted, fearing he would be a target for execution. The Taliban fighter noticed the man’s escape, however, and started shooting at him. Omari and his father stayed in the car waiting and praying for traffic to start moving again so that they could get to the hospital.

Last year, United States and Taliban negotiators signed a deal to end the U.S.’s longest war, which was launched against the Taliban regime in Afghanistan nearly two decades ago under President George W. Bush as a response to the Sept. 11 attacks. For the past three months, U.S. and allied forces have been withdrawing their troops, emboldening the Taliban, which has increased its offensives on cities and villages in an attempt to destabilize the Afghan government and reestablish hard-line Islamist rule. Violence has continued to escalate across the country. As of early July, the Taliban controlled 222 of the country’s 397 districts — up from the fewer than 80 districts it controlled last year.

Despite reports of Taliban brutality, on July 8 President Joe Biden announced that the withdrawal would be completed ahead of schedule, stating that the U.S. had achieved its objectives. “The United States did what we went to do in Afghanistan: to get the terrorists who attacked us on 9/11 and to deliver justice to Osama Bin Laden, and to degrade the terrorist threat to keep Afghanistan from becoming a base from which attacks could be continued against the United States,” he said. “It is the responsibility of the Afghan people alone to decide their future and how they want to run their country.”

Omari, his father, and hundreds of others caught in the long snaking line of vehicles were being used as human shields.

But the withdrawal and subsequent escalation in violence have hampered the country’s ability to provide health care to its citizens. After being caught in the crossfire, many hospitals and health care clinics have been forced to shut down. Those that continue to operate are increasingly difficult to access and often overwhelmed with war injuries. All of this is happening as the delta variant is fueling the country’s third wave of coronavirus cases, leaving people like Omari and his father struggling to access care.

Afghan doctors warn that the fighting will have dire consequences. Haji Shaker Zahedi, director of Shamshad Omar Private Hospital in Baghlan Province, appealed to the fighting factions to consider a ceasefire to allow health workers to reach the communities affected by Covid. “We ask both the Taliban and government sides to not target the health centers,” he said. “We don’t feel safe, and we can’t save the lives of those in need.”

Several doctors working across Afghanistan painted a grim portrait of the conflict and its effect on health care delivery. Last month, Zahedi’s district experienced a surge in Taliban attacks. “Our hospital building looks like a checkpoint right now because of the bullets and the shooting,” he said. Afghan government forces did manage to retake the area after weeks of fighting, but Taliban militants remain close by and continue to launch frequent small-scale attacks.

The uncertain security situation forced Zahedi to reduce his staff to minimize human damage. “We had to dismiss some of our teaching doctors who were here with their families,” he said. Still, the hospital remained open, even while a larger public hospital just 650 feet away was invaded by the Taliban, who view public hospitals as government institutions that need to be seized. Government forces followed the Taliban inside, where the fighting continued.

“At that point, we were the only operating facility” in the district, said Zahedi. He and the staff worked long and stressful hours caring for patients, even while every floor of their hospital was struck by bullets from the nearby fighting.

Doctors in other parts of the country reported similar developments. Navid Atal, a physician and the director of the Kolk Clinic in the southern province of Kandahar, said his clinic was destroyed in February during a battle between the Afghan government and the Taliban. “We were the only clinic serving patients, including Covid cases, in the area and received lot of patients from nearby villages too,” he said. In neighboring Helmand Province, the Taliban attacked a 100-bed hospital, a representative of the Afghan Ministry of Defense announced on July 15. The fighters looted the belongings and destroyed what they didn’t take, according to the official’s account.

Last month, in eastern Afghanistan’s Kunar Province, a rocket hit an area of a hospital that contained liquid oxygen, causing an additional explosion that damaged the vaccine storage area. All of the facility’s vaccines were wiped out, including those for Covid-19.

“Fortunately, no one was hurt,” said Attaullah Saapi, the hospital’s director. In Kandahar, the Kolk Clinic was the only clinic serving patients in the area, according to director Navid Atal. Visual: Courtesy of Navid Atal Atal said his clinic was destroyed during a battle between the Afghan government and the Taliban in February. Visual: Courtesy of Navid Atal

Omari and his father were stuck for hours before the militants finally let their vehicle pass through. But they were soon stopped again at yet another checkpoint. This time, they turned around and went home, where they sought help from a local pharmacist. According to Omari, the pharmacist has treated hundreds of Covid-19 patients, even though he himself lost an eye in a rocket explosion a few months ago. The father received a combination of acetaminophen, multivitamins, and intravenous antibiotics. While this regimen is not backed by scientific data, the family’s options were limited, and in the end, Omari’s father managed to recover at home. Omari now recalls the ordeal as “the most stressful experience” of his life.

The father and son are not the only Afghans to struggle to access care for Covid-19. The medical professionals who spoke with Undark confirmed that the conflict has hindered the country’s Covid response.

Afghanistan has recorded 142,414 cases of Covid-19 and 6,266 deaths, according to data shared by the Afghan Ministry of Public Heath on July 18. However, doctors and public health experts believe that these figures are grossly undercounted. “I am certain that the percentage of those who died from Covid during this period is very high because they could not get help,” said Zahedi. His hospital has continued to accept patients with serious cases of Covid-19. He recalls how one woman arrived in the middle of the night during a period of fighting in the area. She needed oxygen, which was in scarce supply. The hospital staff moved her to an ambulance, which had some oxygen on board. Ultimately, this care may have saved her life. Omari and his father were stuck for hours before the militants — one of whom appears on the right, shouting instructions, here — finally let their vehicle pass through. But at the next checkpoint, the father and son turned around. Visual: Courtesy of Ajmal Omari

Atal said that the coronavirus has also spread across Kandahar, but the region’s Covid-19 response has taken a backseat to caring for those wounded in the conflict. With regard to Covid-19, “Kandahar has been one of the worst hit provinces,” he said, and yet “we also have the war going on.” Every day, casualties arrive at the same health care facilities that are treating patients with Covid-19. Resources are stretched thin. “We have a severe shortage of oxygen in Kandahar City,” he said.

After Atal’s hospital was destroyed, he and the staff stepped up their use of mobile medical units, traveling across villages to provide help to Covid patients. Now, with the fighting extending into civilian areas, “none of these mobile clinics are working anymore,” he said. And he doesn’t just worry about people in villages. He also worries about the hundreds of families who have been displaced by conflict and are now living in makeshift camps in the city. The cramped conditions found in similar camps throughout the country could trigger more infections — and Afghanistan is ill-equipped to deal with them, he warned.

Vaccination has also been a challenge, particularly in the districts that have seen the most fighting. In Baghlan, vaccination drives had to be temporarily paused, said Zahedi. Meanwhile, vaccines have not yet arrived in many districts of Kandahar, said Atal. Even before the U.S. troop withdrawal, public health officials struggled to inoculate the population, in part because of vaccine hesitancy and misinformation.

In mid-July, the Taliban and the Afghan government resumed talks with the goal of arriving at a political settlement. To date, no deal has been reached, but representatives from both sides released a statement agreeing to protect civilian buildings — which include hospitals.

“Both parties assure that they will safeguard all Afghan civilian infrastructures, prevent civilian casualties, and support humanitarian efforts,” the joint statement read. The statement also mentioned the increasing spread of Covid-19, pledging to protect the country’s vaccination teams while also ensuring that liquid oxygen is available in hospitals across the country.

That was welcome news to the country’s physicians. “The security situation is getting worse, and we are getting many injured people. But we must not forget that we are fighting another war against Covid,” said Atal. “If the battles continue between the Taliban and the government, we won’t be able to manage the crisis. And no matter who wins the war, we will all lose to Covid.”