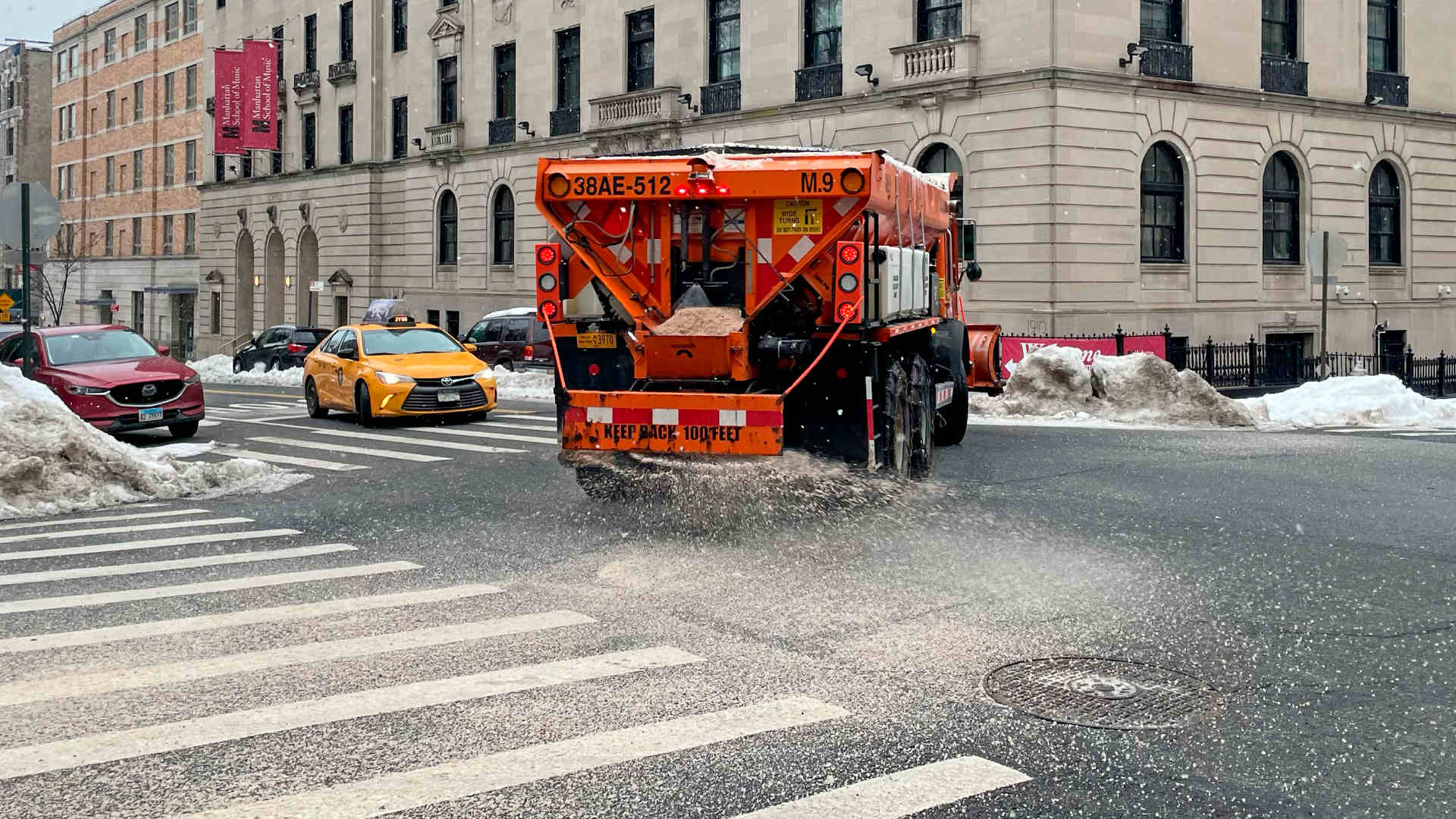 During this unusually snowy year, the rumble of snowplows and salt trucks has become a familiar — and comforting — winter soundtrack across the northern U.S. In southern Vermont, where I live, we received more than 100 inches of snow through February, about twice the typical snowfall for that time of year. Undoubtedly, de-icing salts have prevented numerous accidents on otherwise slick roads.

Although salt contributes to road safety, it racks up high hidden costs. In the U.S., salt damage to infrastructure and the economy is estimated to total between $19.8 billion and $45 billion annually. That includes damage to roadways, bridges, vehicles, tourism, and property values. For example, salt can leach calcium out of concrete and rust steel rebar, a process sometimes known as “concrete cancer” that rots bridges from the inside with few outward warning signs. For all their economic costs, road salts may take an even steeper toll on the environment. As salty runoff infiltrates streams and lakes, it can upset freshwater ecosystems. Authors of a 2017 study estimated that 7,770 North American lakes — about 20 percent of those in the study region — may have elevated chloride concentrations. And this number may be an underestimate, say the authors.

If trends continue, the study concludes, many of these lakes will be too salty to support life within 50 years. Lakes with roads and parking lots nearby are most at risk; 70 percent of these lakes are likely to have elevated chloride levels, based on the study’s sample.

Excess salt can damage entire aquatic food chains, including zooplankton, salamanders and frogs, fish, shellfish, and aquatic plants. At high concentrations, salt can stunt the growth of some fish, making them more vulnerable to predators. It can tilt male-to-female ratios of amphibian populations out of balance. And it can kill off algae-eating zooplankton, allowing algae to grow unchecked into smelly, goopy, hazardous blooms.

Even organic additives made from natural substances like beet juice and molasses, used to improve salt’s melting power, can have unintended consequences. One study found that two common additives, GeoMelt and Magic Salt, caused mosquito larvae to mature and hatch earlier than usual.

Flora Krivak-Tetley, an ecologist at Dartmouth College who co-authored the 2017 study, says that salt concentrations in most lakes have not reached the threshold the Environmental Protection Agency’s deems lethal for aquatic life. But salt can throw an ecosystem out of balance well before that happens, she notes.

And this is to say nothing of the enormous carbon footprint associated with transporting and distributing the salt, much of which arrives on barges from countries such as Chile and Egypt.

How, then, can we balance our need for safe roads with our duty to protect the environment?

If trends continue, the study concludes, many of these lakes will be too salty to support life within 50 years.

In 2015, the not-for-profit FUND for Lake George, in upstate New York, launched an effort to answer that question. They started by working with towns around Lake George to determine just how much salt they used. Maintenance managers deployed GPS to track trucks’ speed and position, and used sensors to measure how fast salt was being released. This feedback allowed road crews to calibrate their distribution rates, saving money, salt, and effort.

Next, leaders in the Lake George region experimented with ways to keep the roads clear using less salt. They found it worked well to pretreat roads with salt brine before winter storms. The liquid prevents snow and ice from bonding with the asphalt, making it easier to scrape roads clean. Unlike grains of rock salt, which often bounce onto road shoulders, brine largely adheres to its target.

Area officials found that, pound for pound, brine was far more efficient than traditional rock salt. They could protect a lane-mile of road with a solution containing under 100 pounds of salt, roughly one third the amount used by rock-salt trucks.

Last, the towns switched to live-edge plows, which have flexible blades made up of multiple, independently moving sections mounted on springs. These state-of-the-art blades are more thorough than conventional ones. And starting with brine makes the plows even more efficient, says Eric Siy, executive director of The FUND for Lake George. If live-edge snowplows are like razors that hug the curves, brine is like shaving cream.

The sweeping changes to road care required a culture shift within the towns’ maintenance departments. But black roads and shortened plowing times ultimately convinced road crews near Lake George to embrace sustainable winter management. Over two years of using brine and live-blade plows, these communities cut their salt usage in half, a drop that maintenance officials say can’t be explained by weather variations.

The changes also saved the municipalities time and money. Siy says that the town of Hague, New York, saved $66,000 of its $150,000 winter maintenance budget last winter. If just half the towns in New York achieved results like Hague’s, Siy says, taxpayers’ annual savings would be more than $30 million.

The Lake George area’s project is one of many efforts to create a more sustainable paradigm of winter road maintenance. Road salt use is also starting to decline in other communities around the nation as maintenance chiefs exchange best practices. More cities have incorporated brine pretreatments, flexible plow blades, and truck-level monitoring into their road maintenance regimes.

“There’s no trade-off, there’s no compromise,” says Rick Relyea, an ecologist at Rensselaer Polytechnic Institute who has partnered with The FUND for Lake George on a multi-year research project studying the lake’s water quality. “It’s not the environment versus safety. You can have both.”

As America thaws out from one of its snowiest winters in recent memory, the lessons of Lake George are timely. The U.S. applies about 24 million tons of salt to its roads each year. If salt use continues unabated, the environmental costs may be even higher than we can imagine. Experts say we’re only just starting to learn about the unintended impacts road salt has on ecosystems.

A nationwide effort to move toward sustainable winter road maintenance is long overdue — and it would be well worth the investment.