In major cities around the globe, the sky often bears a brown haze. While air quality in the United States has improved in recent decades, industrial pollution remains a persistent public health hazard, stemming from any number of sources — vehicles, boilers, power plants, construction equipment, boats, and commercial cooking facilities, to name just a few. The people who live nearby are chronically exposed to contaminated air, and this exposure can compromise their lungs and hearts. Under these conditions, the rate of chronic illnesses increases, and so does the likelihood of developing a serious respiratory disease like Covid-19.

As the SARS-CoV-2 virus spreads across the country, it’s reaching the four in 10 Americans who, according to the American Lung Association, live in areas with unhealthy air. Research from China during the 2003 SARS outbreak, caused by a different coronavirus, found that patients with long-term exposure to air pollution were twice as likely to die from it. In the United States, black, Hispanic, and low-income communities face a disproportionate share of that pollution. Some researchers worry that air pollution — in addition to other factors such as high-density housing and lower access to health care — could make these communities more vulnerable to the Covid-19 pandemic.

After SARS killed 349 people in China in 2003, Zuo-Feng Zhang, a professor of epidemiology and medicine at the University of California Los Angeles, studied fatality rates and air pollution. He found a strong dose-response relationship, meaning a person exposed to higher levels of air pollution was more likely to die from SARS.

“If you’re living in a high-pollution area, your risk is doubled,” Zhang said. In the two most polluted cities, Beijing and Tianjin, the fatality rate reached 7.66 and 8 percent, respectively. 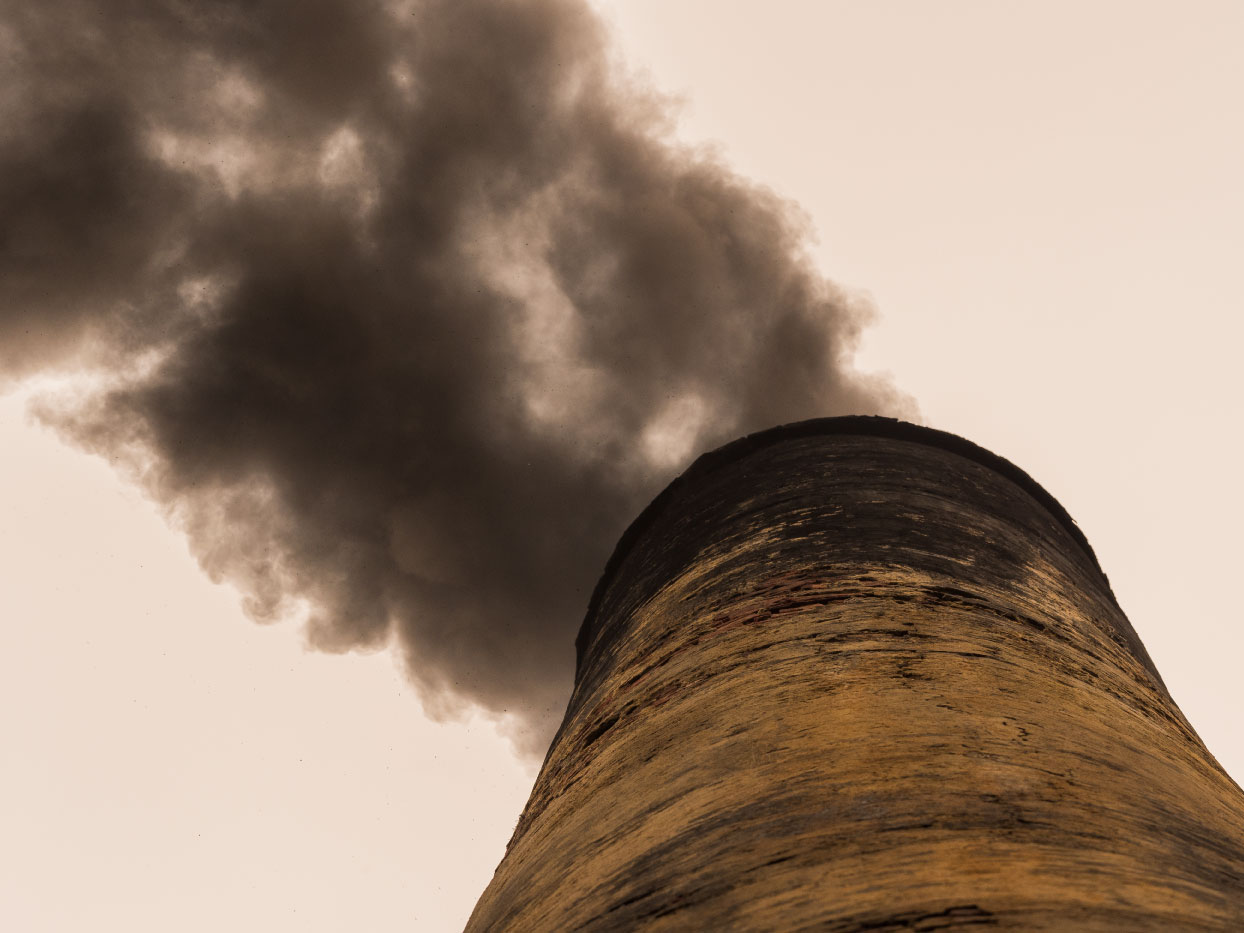 The study couldn’t filter out other influential variables including age, socioeconomic status, available health facilities, and clinical practices, as well as the major risk factor of tobacco smoking. But the association between exposure to air pollution and mortality was echoed in a study from the Fudan University in Shanghai. That study examined air quality in Beijing during a portion of the SARS outbreak. It suggested an increase in particulate matter and nitrogen dioxide might be associated with mortality. The study “adds new evidence for the detrimental effect of air pollution on the prognosis of SARS patients, although such a correlation deserves further investigation,” the paper reads. The researchers also looked at sulfur dioxide rates, and failed to find a strong relationship, which they said might be attributed to the low level during the SARS outbreak, or to the pollutant’s high solubility.

Zhang is hoping to conduct similar research on Covid-19. Given its global spread, he said, “This actually put us in a position to look at air pollution in all different countries, to see if there is any strong association between air pollution and the Covid-19 deaths.”

Recent research out of the Harvard University T.H. Chan School of Public Health suggests as much. After analyzing more than 3,000 U.S. counties, the study found small increases of particulate matter pollution associated with a 15 percent increase in the Covid-19 death rate. The findings are consistent with previous research on the SARS outbreak, the study reads, and provide “a motive for expanded-follow up investigations as more and higher quality Covid-19 data become available,” as well as a reason to continue enforcing air pollution regulations.

Generally, air quality is better in the U.S. than it is in China and India. This month, much of the country registers on the national monitoring system AirNow at below 50 on an air quality index scale of up to 500, with the top-five hot-spots reaching to between 70 and 150. In China, many more sites currently report levels above 150, with peaks above 200.

Still, the American Lung Association estimates 141.1 million people live in counties that have unhealthful levels of ozone or particle pollution. The association’s list of cities with dirtiest air overlaps with several where Covid-19 has taken a firm hold, including Chicago, Detroit, and Los Angeles. The Chinese cities that Zhang studied had air pollution indexes of between 75 and 104. According to AirNow, air below 100 is considered healthy for the general population. In 2018, AirNow counted 110 days above 100 in Los Angeles.

With road and air travel ground to a halt, the skies in American cities are less polluted now than they were before the pandemic, but experts say the effects of decades of exposure won’t simply disappear.

But a lot of variables come into play. “There are so many other factors that are so dominant,” said Jonathan Samet, a pulmonary physician and epidemiologist at the Colorado School of Public Health, a partnership of the University of Colorado Anschutz, Colorado State University, and the University of Northern Colorado. Air pollution might be a minor player over an inability to socially distance, or actively smoking and perhaps vaping. “Our pollution exposures vary,” Samet said. “Disentangling this for research, would be, to me, almost an impossibility.”

But researchers do have a theory for how air pollution makes people more susceptible to infection.

Air pollution comes in several forms, including ozone and black carbon. For public health, the most concerning of these are fine particles, often referred to as PM 2.5. These tiny, airborne particles can penetrate the lungs and enter the bloodstream. Sometimes, they bring with them toxic volatile organic compounds or metals.

The lungs are equipped to respond to anything inhaled along with the 10,000 liters of air the average adult breathes daily. That system starts with the nose as a filter, then moves through airways designed to cough out irritants. The lungs are lined with filaments that sweep particles out and liquid that absorbs gases. But these invaders can also cause an immune response that produces inflammation

The list of cities with dirtiest air overlaps with several where Covid-19 has taken a firm hold, including Chicago, Detroit, and Los Angeles.

If overloaded briefly, the system sometimes responds with asthmatic episodes or heart attacks. Long-term exposure can also kickstart chronic diseases, including cancer, chronic obstructive pulmonary disease (COPD), asthma, and diabetes. Strain on the lungs passes on to the heart.

If a virus adds on to an already damaged system, organs can fail. Early research on Covid-19 suggests risk of hospitalization and time in intensive care units correlates to preexisting health conditions even more than to age. Chronic pollution exposure contributes to the burden of those conditions, and then Covid-19 becomes a stressor that causes those systems to fail, said said Beate Ritz, a professor of epidemiology, environmental health, and neurology at University of California, Los Angeles.

“How full is your bucket of water? Do you need a drop to make it flow over, or do you need a liter of fluid?” Ritz said. “The bucket is pretty empty in healthy people, and it’s pretty full in those who already have all sorts of chronic background issues.” These include people with COPD, diabetes, and cardiovascular disease. “They don’t have the same reserves,” said Ritz. “Their system is already kind of imbalanced. That bucket is already pretty full.”

Each year, Panagis Galiatsatos, a pulmonologist and professor at the Johns Hopkins University School of Medicine, visits Baltimore-area schools to talk to students about their lungs, lung infections, and how tobacco and air pollution affect their bodies. Then the “Lung Health Ambassador Program” culminates in an advocacy component. Last year, students from some of the state’s most polluted — and minority neighborhoods — wrote letters to their governor.

“It was anything from ‘I don’t want to be another statistic,’ to, ‘I hate knowing the fact that, because of who I am, I’m destined to have worse health outcomes,’” Galiatsatos recalled. He’s lead author on a forthcoming paper in Critical Care Medicine, which found people from disadvantaged neighborhoods have a higher chance of being readmitted to a hospital after a serious infection.

Some of the students he teaches live in neighborhoods with numerous tobacco retail stores and busy roadways. Given the indoor and outdoor air quality, he said, “These lungs are the last lungs who need an infection.”

Black communities are 54 percent more likely to be situated near the refineries and factories emitting concerning pollutants, according to a study published in the American Journal of Public Health in 2018. Hispanic populations also face above-average risk. Race was a greater indicator than poverty status, according to that study.

In Manhattan, five of seven bus depots are located north of 100th Street in predominantly black and Hispanic neighborhoods. People living in those neighborhoods are often in public housing projects prone to mold and pests, and then face outdoor air quality challenged by highways, buildings that burn oil for heat, and bus exhaust, said Lubna Ahmed, director of environmental health at WE ACT for Environmental Justice, based in Harlem.

“We’ve heard accounts of people who are given guidelines to enhance their indoor air quality, create a better ventilation space, so open your windows, but then there are people that live just above these freeways, and it’s like, wait, don’t open your windows, because the amount of PM 2.5 coming off the freeways is really detrimental,” Ahmed said.

Some of the organization’s 800 members have reported smelling fumes in their homes, their eyes burning, and on hot days, feeling like the air has become thick and difficult to breathe. One in four children in Harlem have asthma, Ahmed said, compared to one in 10 or 11 children nationally.

In Manhattan, five of seven bus depots are located north of 100th Street in predominantly black and Hispanic neighborhoods.

“We know those communities are facing the worst air quality, particularly in the fine particulate matter,” said Bill Magavern, with the Coalition for Clean Air, based in California.

“These are also the communities that suffer from the worst health care and the worst socioeconomic conditions because of historic discrimination,” he added. So a pandemic is doubly difficult for these communities.

Afterall, he says, if you go back to a community where the environment contributes to your risk of disease, “you’re right back to the risk factors that made you susceptible to begin with. Usually, that just exacerbates your inability to heal properly.”

Elizabeth Miller is an award-winning journalist who writes about wildlife, public lands, and energy development. Her work has been supported by Freelance Investigative Reporters and Editors, the National Press Foundation, and the Banff Center for Arts and Creativity.